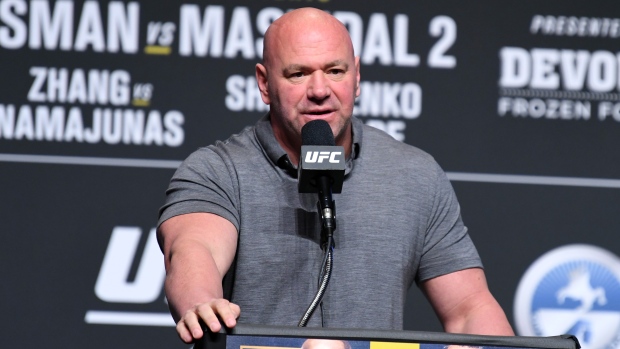 One victory in the UFC is all it took for one half of Saturday’s UFC 262 main event to earn his place in the lightweight title fight.

Michael Chandler arrived in the promotion in a big way, earning a first-round TKO victory over Dan Hooker at UFC 257 and giving a memorable post-fight Octagon interview after the win.

UFC president Dana White has been impressed with the way Chandler has handled himself from the time they added him to the roster to now earning his title opportunity.

“When we were getting ready to sign him, I was literally sitting on the runway getting ready to take off and my lawyer called me and said ‘we’re on the one-yard line with this kid, will you just get on the phone and talk to him,’ I talked to him for five minutes, the nicest kid in the world, great attitude, wanted nothing more than to be in the UFC and fight for a UFC world title,” White told TSN.  “I called Hunter (Campbell) back and I said, I don’t care what he wants, get it done, give him whatever he wants, sign this kid, I love him.”

After his UFC debut victory in January, Chandler called out Conor McGregor, Dustin Poirier and Khabib Nurmagomedov, but it’s a fighter with his own unique path to the title opportunity that will be standing across from him on Saturday in Charles Oliveira.

While Chandler will be fighting for the belt in his second UFC bout, Oliveira will be contesting his 28th fight in the promotion and will set the record for most fights before becoming a champion if he is successful. That mark is currently held by Michael Bisping, who won the middleweight title in his 26th fight.

White is just as impressed with Oliveira and compares his longer journey to the title to one of the greatest champions in the history of the UFC.

“This guy has consistently won, has consistently come in and done his thing,” said White. “Not everybody comes out and is a breakthrough star or rises to the top immediately, some guys have to take time [to] grind it out and then if you’re talented enough and things go your way, you can get there. Chuck Liddell was one of those guys, Chuck didn’t have this meteoric rise to the top. When we first got involved and bought the UFC, the old UFC didn’t even want Chuck Liddell. Not everybody’s path is the same and Charles finally got here.”

Another veteran of the UFC didn’t have as much luck this past weekend as the promotion’s winningest fighter, Donald “Cowboy” Cerrone, suffered a first-round TKO loss at the hands of Alex Morono, his fifth loss in his last six fights with only a no-contest to break up the losing run.

Cerrone faced a last-minute replacement in Morono in a higher weight class and White plans to let him drop back down to lightweight and take another fight.

“Cowboy, again, steps up, Diego (Sanchez) falls out of the fight, he steps up and takes a last-minute replacement, co-main event,” said White.  “He accepted the Diego fight because they both said they would fight at 170 pounds, he wants to move down to 155 pounds and get another fight and I’m going to let him do that.”

The 33-year-old’s anticipated move to heavyweight has not gotten off the ground amid contract talks for an expected fight with champion Francis Ngannou.

White does not believe that Jones’ management situation will change the former champion’s plans.

“Whether Jon has a manager or not, Jon is going to do what Jon wants to do,” said White. “It’s probably something that Jon needs to work out. I know that him and Hunter have a good relationship, so I think those guys are going to get together soon and talk.”

“You look at the last however many years, people ask me who I think the best ever is and I say Jon Jones. Jon Jones is a massive part of the history of this company. No matter where you stand, whether you think it’s him, Anderson (Silva), Khabib (Nurmagomedov), GSP, wherever you stand on that, he’s one of the best of all-time and obviously there are still some big fights that can be made with him. We would love to do it, it’s not like we can’t get something done over here, but it’s up to Jon.”

Canadian Felicia Spencer will compete on May 22 in the last women’s featherweight bout currently on the UFC’s schedule.

White said the direction of the division rests in the hands of its very accomplished champion.

“We’re still goofing around with that division, trying to see what the GOAT wants to do, you know, Amanda Nunes,” said White. “That’s what we’re doing.”

Professional Fighters League’s Kayla Harrison has been mentioned as a possible contender to face Nunes for the featherweight belt. White has an eye on her, but he isn’t sure she wants that fight at this stage of her career.

“I don’t know if she’s ready, when she feels like she’s ready, I’m always looking for the best possible people to come in and fight,” said White. “If you don’t think that, we’ve offered for her to come over. I just don’t know if her people think she’s ready yet. It’s a whole ‘nother level when you get here.”​