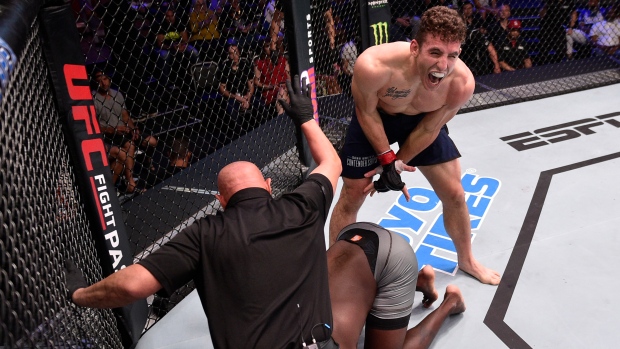 The sixth episode of Season 3 of the Dana White Tuesday Night Contender Series featured a lot of exciting fighters and some great matchups.

The first bout of the evening featured heavyweights Rodrigo Nascimento and Michal Martinek in what many considered a striker versus grappler matchup.

The striking seemed pretty even early on, but Martinek made a fatal mistake when he went for a takedown and in a scramble ended up on the bottom of the submission expert.

Nascimento took his time on the bottom, controlling Martinek until he inevitably locked in an arm triangle to secure an impressive first round victory.

Rodriguez showed early why all of his previous wins had come inside the distance as he threw a ton of power strikes in the first, which was likely his most dominant round.

In the second, Farrington used his range to make things a bit harder on Rodriguez and had more success than in the first, but still ultimately got hit by the more powerful, accurate strikes.

The third round was also back-and-forth between the two fighters and Farrington may have been edging Rodriguez out until he was taken down with Rodriguez advancing to mount and raining down big shots to end the fight.

In the third fight, Mariya Agapova aimed to become the first female fighter from Kazakhstan in the UFC when she faced Tracy Cortez in the women’s flyweight division.

This fight was all Cortez as Agapova just had no answer for her on the ground, which is where most of this fight took place.

The second round in particular was one-sided, as Cortez controlled almost the entire round on the ground, attempting several chokes and advancing position.

The third round may have been the closest one and it also featured a lot of ground work from Cortez, who scored a unanimous decision (30-26, 30-26, 29-27) win over Agapova.

The fourth bout featured featherweights Steven Nguyen and Aalon Cruz and it was three rounds of striking at a frenetic pace.

Early on, Nguyen had a major volume advantage over Cruz as a lot of the exchanges were the punching combos of Nguyen against a mixture of kicks from Cruz.

The second round was more slanted towards Cruz due to his diverse kicking attack that included a flying knee that hit Nguyen right on the chin, but did not seem to faze him.

However, in the third round, that same flying knee connected right on the money towards the end of the frame and Nguyen went down. It was one of the most vicious knockouts in the show’s history and Dana White essentially gave Cruz a contract on the spot.

In the main event, Aleksa Camur faced Fabio Cherant. The first round was very exciting with good exchanges and it took Camur some time to get his rhythm.

In the second round, Cherant hit Camur with a nice shot, but Camur countered with a flying knee reminiscent of the one from the previous fight, which rattled Cherant and allowed him to finish with ground strikes after Cherant hung in for as long as he could.

My two contract selections: If I had only two contracts to give out, I’d award them to Rodrigo Nascimento and Aalon Cruz. Nascimento looks like a solid heavyweight prospect who is young and undefeated and Cruz had one of the best highlights in the show’s history, while showing a very diverse set of kicks.

Dana White’s contract selections: White awarded contracts to Nascimento, Cortez, Cruz and Camur. Another generous evening when it comes to contracts and rightfully so as all of them were worthy.

Highest ceiling: Even though I didn’t give Aleksa Camur a contract, I think that he has a ton of upside at age 23 and in a division that is in need of young talent. The sky's the limit for him.

Biggest question mark: Nascimento is young and undefeated, but his striking looks pretty low level for a heavyweight. He is going to need to work on that part of his game in order to get into the heavyweight top-15.