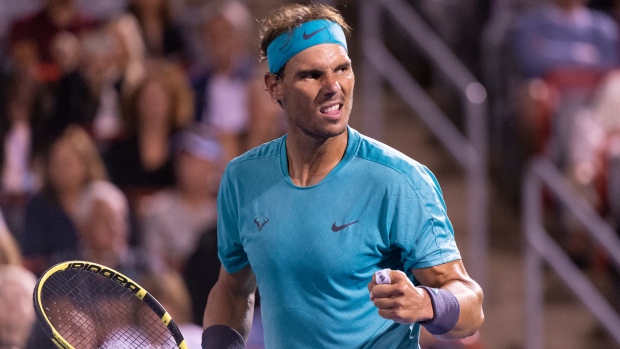 MONTREAL — Adrenaline pumping through his veins following a gutsy quarterfinal victory, Gael Monfils was ready to head right back onto centre court and battle one of the game's greats under the Rogers Cup lights.

His coach had other ideas.

The French showman beat Roberto Bautista Agut in a match delayed more than 18 hours because of weather Saturday, but hurt his ankle in the process, forcing him to withdraw shortly before a primetime semifinal with top-seed Rafael Nadal.

"I love these matches, night session, Rafa," Monfils said. "I play tennis for that — for the big moments, big shows.

"It was (the) safest decision not to play."

Looking for his fifth Rogers Cup, Nadal will now take on Daniil Medvedev in Sunday's final after the Russian defeated countryman Karen Khachanov 6-1, 7-6 (6) in the other semi at the US$5.7-million ATP Tour Masters 1000 series event.

"It's extra special," Medvedev, the No. 8 seed, said looking ahead to his first meeting with the Spanish legend. "I played Novak (Djokovic) and Roger (Federer) a few times.

"It's different ... there is some extra pressure."

Medvedev, who made last week's final in Washington, is 1-6 all-time against the Big 3, with his only victory coming over Djokovic at Monte Carlo back in April.

"It's fun to play them," said the 23-year-old. "That's what I have been working for all my life. As a kid I saw them winning Grand Slams on TV.

"I would never expect to play against them."

After beating Bautista Agut 6-4, 3-6, 7-6 (2) on that wonky ankle, Monfils said he might have been able to play the semi had his quarterfinal against the Spaniard been played Friday night as scheduled.

Instead, it was delayed until 1 p.m. ET on Saturday before another storm pushed the start time to just after 3:30 p.m.

That would have meant Monfils, ranked No. 20, going up against Nadal with only 2 1/2 hours of recovery time.

"It's the first tournament since my comeback," said Monfils, who pulled out of Wimbledon last month because of the same injured ankle. "I have to take into account I was going to play against Rafa. Against Rafa, you have to be 100 per cent."

The inclement weather turned out to major factor this week.

Apart from disappointed fans, it also means organizers will take a hit in the pocket book, although Montreal tournament director Eugene Lapierre said the Rogers Cup took out insurance on the semifinals and final this year for the first time.

He hopes to recoup half of the $1 million in lost revenue from Saturday night's ticket refunds. The situation could also help the fight for a retractable roof at IGA Stadium.

"If we had a roof, this doesn't happen," Lapierre said. "If (Monfils) had played his match (Friday) evening, he wouldn't have needed to do this marathon."

In the semifinal that was contested, Medvedev broke Khachanov, the No. 8 player in the world, twice in a first set that took just 23 minutes.

Ranked right behind Khachanov at No. 9 coming into Montreal, Medvedev broke his opponent for a third time to go up 2-1 in the second set. But Khachanov broke right back and led 3-2 at the changeover.

Medvedev broke Khachanov again to lead 5-4 only to give it right back serving for the win.

Then up 7-6 in the tiebreak, Medvedev sealed it when his shot clipped the net and bounced in, ending a match that took one hour 23 minutes to set up a final against the No. 2 player in the world.

The Russians — both 23, six foot six and from Moscow — shook hands and embraced afterwards as Medvedev evened his tour record against Khachanov at 1-1.

"If I am able to play like this, it's not going to be easy for Rafa," Medvedev said. "It's going to be a big battle."

This year's women's tournament, where Bianca Andreescu of Mississauga, Ont., advanced to the title match, is being played in Toronto.

Fans braving the rainy conditions in Montreal watched part of the Canadian teenager's victory over Sofia Kenin of the United States in the semis on the big screens at IGA Stadium.

Medvedev is the first Russian to make men's final since Marat Safin won the event back in 2000 when it was called the du Maurier Open. Saturday also marked the first time in the 30-year-old history of the Masters 1000 Series that two Russians had competed in a semifinal.

Back in June, Khachanov became the first Russian to crack the top-10 since Mikhail Youzhny in February 2011. Medvedev then joined him there on July 15.

He will jump over Khachanov when the new rankings come out — but first things first.

"I won't be intimidated," Medvedev said of Sunday's challenge. "I want to win every match I play. Hopefully I can do it."