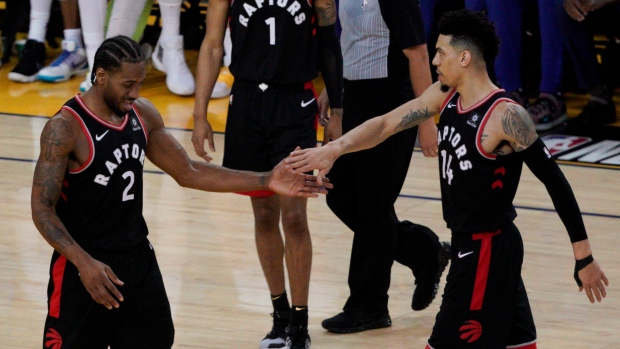 Despite winning two NBA titles with Kawhi Leonard, Danny Green said Thursday he was given no insight on the NBA Finals MVP's free-agency decision before Leonard signed with the Los Angeles Clippers last week.

Green, who spent the past eight seasons as a teammate of Leonard, said he had no idea the star forward wanted to team up with Paul George, who the Clippers traded for to lure Leonard to them.

"I had brief conversations with them after it, they think they got lucky with it," Green said. "Nobody knew about it. I had no idea. I checked in with [Leonard] all the time. He gave me no updates. I had no idea where he was going."

Green added, however, that he did not expect the two team up on Los Angeles Lakers, who Green joined shortly after Leonard's decision was reported.

"I think all of it was a shock to me," Green said. "Except not as much of a shock Kawhi going to L.A. The Clippers, anyway. I didn't see him coming this route [to the Lakers].

"I feel like he wanted to go his own route. I think it was between them and going back [to Toronto]. I think the year that he had and what those fans brought this season and everything, it was hard for him to turn it down and leave Toronto. But I knew he wanted to be closer to home."

The 32-year-old Green will now rejoin forces with LeBron James, who he spent one season alongside with the Cleveland Cavaliers in 2009-10.

"It wasn't very hard, man," Green said of his free agency decision. "LeBron and Anthony Davis are here. Obviously when you're with a winning team and you've won, you want to run it back if it's possible. But that wasn't going to happen. And even if it did happen, I don't think they had room for me there [in Toronto]. So you go to the next best team you think in the league is and that was here."