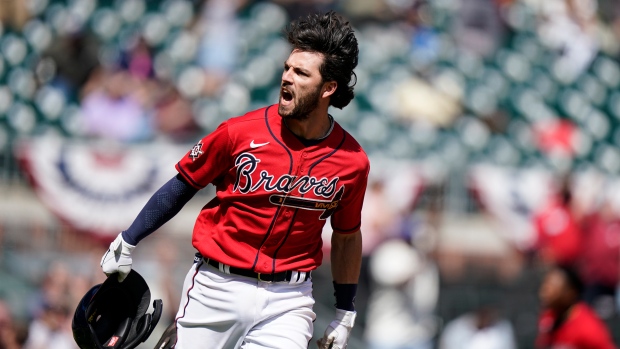 ATLANTA — Dansby Swanson and the Atlanta Braves were in danger of being swept in a four-game series by the Marlins, something that had never occurred.

Didn't happen this time, either.

“Pressure situations are something I love,” Swanson said. “I love to have that pressure and the game hanging in the balance. It’s such a thrill.”

The Braves recovered after blowing a 5-4 lead in the top of the ninth. Garrett Cooper singled to put Miami ahead.

Dylan Floro (0-1) couldn't hold the 6-5 lead in the bottom half. Ender Inciarte and Ronald Acuña Jr. singled and Freddie Freeman walked to load the bases with no outs.

Floro struck out Travis d’Arnaud before walking Ozzie Albies to force in the tying run. Swanson's single to left field set off the on-field celebration.

“I don’t know that I want anybody in that situation other than Dansby,” Braves manager Brian Snitker said. “He’s amazing in that arena. He loves it when the pressure is on him.”

Pablo Sandoval connected for his third pinch-hit homer this season, a three-run drive in the seventh that gave Atlanta a 5-3 lead.

Acuña hit a two-run homer, his seventh, for Atlanta’s only runs off Trevor Rogers, who pitched five innings and allowed three hits.

With Atlanta clinging to a 5-4 lead, A.J. Minter (1-0) walked Miguel Rojas to open the ninth, with ball four sailing to the screen behind home plate. Adam Duvall's pinch-hit double to the wall in right-centre tied the game.

With two outs, Cooper lined a single past Swanson's dive at shortstop.

The Braves trailed 3-2 before Sandoval lined the opposite-field shot off Zach Pop into the Marlins' bullpen behind the left-field wall. The homer, which drove in Austin Riley and Guillermo Heredia, gave Atlanta a 5-3 lead.

Starling Marte led off the seventh with a homer off Nate Jones, trimming Atlanta's lead to one run.

Marlins second baseman Jon Berti raced into shallow centre field to make a tumbling, over-the-shoulder catch of Albies' pop fly to open the second. Berti reached for the ball with his back to the infield to make the catch.

Jazz Chisholm Jr. doubled in the second and scored on Berti's double off Ian Anderson. Chad Wallach's single drove in Berti for a 2-0 lead. Corey Dickerson's run-scoring single in the fourth added to Miami's lead.

“At the end of the day we played well here and I think we’re laying the foundation,” manager Don Mattingly said.

Heredia had two walks and was hit by a pitch in his first start after being recalled by the Braves on Wednesday. Heredia was needed after CF Cristian Pache (strained left groin) was placed on the 10-day injured list.

With his run-scoring double, Duvall was 7 for 14 in the series with three homers and nine RBIs against his former Atlanta teammates. He scored six runs.

TIME FOR A PROMOTION

Acuña's seven homers leads the majors. He is hitting .442 and has 14 RBIs.

“When is he going to get called up to the next league, that’s what I’m wondering,” Anderson said. “He’s been unreal. ... We’re happy he’s on our team, I can tell you that.”

Added Sandoval: “It’s unbelievable. He’s from another planet. He can hit. He can run. He’s a special guy.”

Braves: LHP Drew Smyly will look for his first win of the season when Atlanta opens a three-game series at the Chicago Cubs on Friday.