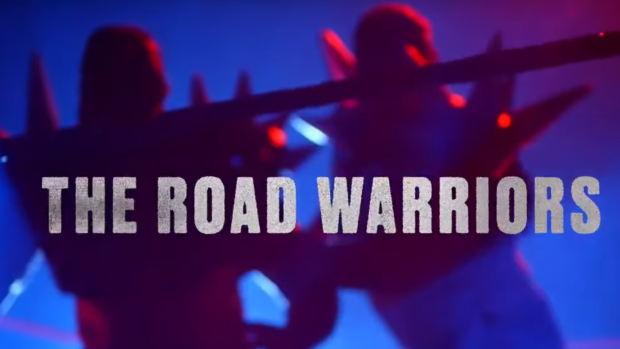 Michael Hegstrand and Joe Laurinaitis didn’t know that bouncing a local bar in Minneapolis would be the gateway to becoming one of the greatest tag teams in professional wrestling history.

Laurinaitis portrayed ‘Animal’ while Hegstrand played the role of ‘Hawk.’ Together, they were The Road Warriors, the subject of the latest episode of the documentary series Dark Side of the Ring. Their presence and intensity revolutionized the world of tag team wrestling.

You can watch Dark Side of the Ring: The Last Ride of The Road Warriors tonight on Crave at 10 p.m. ET, 7 p.m. PT.

Eddie Sharkey, a former professional wrestler, had worked in the same bar at the time when he asked Laurinaitis if he was interested in joining his wrestling school.

The Road Warriors, “two no-nonsense badasses,” as Laurinatis describes the team in the documentary, dominated the territories shortly after their debut in 1983. After winning tag titles in the AWA, NWA/WCW and in Japan, their rising star status brought them to the World Wrestling Federation in 1990.

"You looked at them and went ‘holy s***,’" Barry Darsow, who worked in the WWF as Smash from Demolition, says in the episode. "I hope they won’t kill me."

The Road Warriors had it all – the look, the size, the accolades. But as the team grew in popularity, Dark Side of the Ring tells how Hegstrand struggled with a demanding wrestling schedule.

To deal with injuries, Hegstrand took drugs and alcohol to overcome the pain. The issues drove a wedge between the tag team that saw them disband and reunite several times over.

On the road to becoming clean, Hegstrand suffered a heart attack and passed away in 2003 at age 46.

"When you’re doing the coke, and the muscle relaxer, your heart can’t take that all the time," said his former tag partner Laurinaitis.