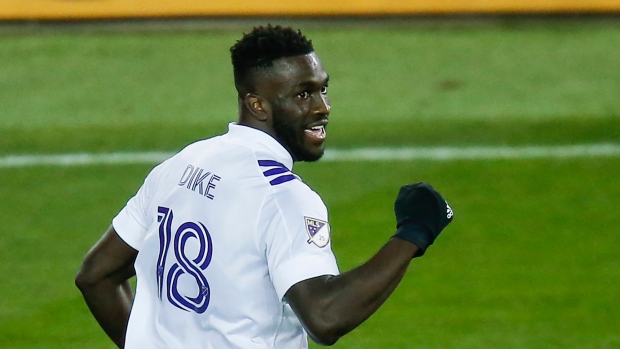 HARRISON, N.J. — The Montreal Impact are leaving it to Decision Day next Sunday to see if they can qualify for this year's Major League Soccer playoffs.

Daryl Dike scored for the third consecutive game and Orlando City beat the Montreal Impact 1-0 on Sunday night at Red Bull Arena. Montreal (7-13-2) has lost three in a row and five of six, including a 1-0 loss to Nashville Tuesday night.

"It's been twice (in a row) now that we don't score and lose 1-0. Normally, we score," Impact manager Thierry Henry said.

Despite the loss, the Impact remain in ninth place in the Eastern Conference. D.C. United and Inter Miami both had a chance to jump over Montreal in the standings Sunday night had they won, yet both teams lost to New England and Toronto, respectively.

Impact midfielder Amar Sejdic, however, was disappointed the Impact couldn't get points to help themselves.

"It's very frustrating. Somehow for us the ball is not as kind. We were in their throats for a large part of the second half," Sejdic said.

"At the end of the day you have to accept it and move forward because the next game is a big one for us. We made the situation for next week more difficult for us by not winning today. Next week is Decision Day, so every player needs to put 100%. There needs to be a lot of passion and desire if we want to make it."

The 6-foot-2, 220-pound Dike ran on to a perfectly played through ball from Mauricio Pereyra and rolled in a one-touch shot from the centre of the area in the 39th minute. The 20-year-old rookie scored his seventh goal of the season.

"Tonight, it was a game that was probably missing some precision in the boxes offensively, but in the bright moment Mauro [Pereyra] came and put that beautiful ball to Daryl [Dike] and then we found the goal." Orlando City SC head coach Oscar Pareja said.

Orlando City (10-3-8) has won back-to-back games after a loss to Inter Miami on Oct. 24 that snapped a 12-game unbeaten streak.

Goalkeeper Pedro Gallese had five saves, including a diving stop in the 92nd minute, for Orlando City. He has three shutouts this season.

Montreal will play for a playoff spot on Decision Day next Sunday afternoon against D.C. United in their final match of the season. Orlando City SC has already clinched a playoff spot and has two more matches to play. They will play Columbus on Wednesday before meeting Nashville Sunday.

--With files from The Canadian Press.