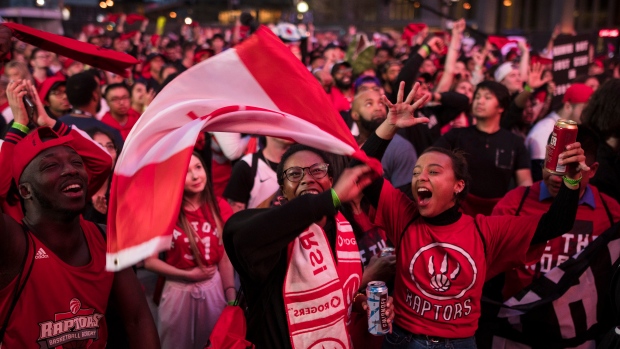 While Canadians prepare to cheer on the Toronto Raptors in the upcoming NBA Finals, it appears the majority of Americans are also rooting for Canada’s team.

According to a map created by BetOnline, all but three U.S. states (California, Nevada and Hawaii) are cheering for the Raptors ahead of their Game 1 matchup with the Golden State Warriors.

The data is based on how often social media users in each state added #WeTheNorth and #DubNation, the official hashtags of each team, to their tweets.

“This is pretty amazing,” Christopher Doyle, head of sports partnerships at Twitter Canada, told CTV News Channel on Wednesday. “What the third-party data is showing is that there’s a tremendous increase in the ‘#WeTheNorth’ hashtag, not just in Canada.”

Even people in Florida, Pennsylvania and Wisconsin appear to be cheering for the Raptors this week, despite Toronto eliminating a team from each state through the playoffs.

“I think there is a theory here where once your sports team loses, you kind of hop on the bandwagon of the team that knocked you out,” Doyle said.

He believes there are two primary factors behind the increase in U.S. social media engagement with the Raptors.

Game 1 of the NBA Finals begins Thursday at 9 p.m. ET.