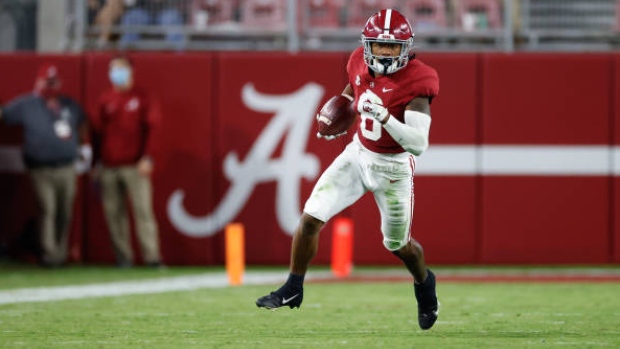 John Metchie and Jesse Luketa are both certain to hear their names called this week at the NFL Draft.

Besides being highly decorated players at two of the most prestigious college programs in NCAA football – Alabama and Penn State, respectively – the two have another connection.

They were coached in high school, coincidentally, by brothers.

John Root, the head football coach of Saint James School in Maryland, received a visit in August of 2014 from a young receiver from Brampton, Ont. He arrived with his parents, eager to enroll and chase his football dreams.

Metchie had just turned 14, but already knew what he wanted. Growing up in Brampton, he had followed his three older brothers into football and wanted to take things to a higher level by enrolling in high school in the U.S.

“That was my second year at Saint James, so we were looking for kids who wanted to be ballplayers and were high-academic, high-character kids,” recalled John Root. “Here was a kid who was smart, a great athlete and the kind of player you want to surround yourself with when you are building a program. We were excited to have him, we just didn’t know how good he was going to be.”

Roughly a year after Metchie got to Maryland, John Root’s brother, Jeff, was the beneficiary of a young Canadian chasing his own football dream.

Jeff is the head coach at Mercyhurst Prep in Erie, Pa. During the summer of 2015, he got a visit from a young defender from Ottawa who was looking for an opportunity to play in the U.S.

Luketa had grown up as the youngest of seven children to a single mother. He never let economic challenges dash his plans, writing to prep schools all over the U.S. in search of a path that would lead him to the NCAA, and ultimately the NFL.

“All our coaches watched this 15-year-old who doesn’t come from a lot, and you would have thought he came from royalty because nothing bothered him,” said Jeff Root. “He had a plan and he never wavered from it. I’d never seen anything like that from a young man this age. It was amazing, just amazing.

“We were just building our program and he was the catalyst we needed to really push us forward.”

Luketa and Metchie made the most of their time in high school, launching themselves onto the biggest stages in college football.

Metchie went on to star at the University of Alabama, racking up more than 2,000 yards over three seasons, winning a national championship and twice being named recipient of the Jon Cornish Trophy as the outstanding Canadian in NCAA football.

Luketa moved from safety to linebacker at Mercyhurst, earning a scholarship to Penn State University – a.k.a. Linebacker U – where he was a two-time team captain, evolving into a hybrid defender who can play linebacker and defensive end.

Their stories represent how aggressively young Canadian players are pursuing their paths to professional football, competing against top competition to put themselves in the best position to move to top NCAA programs.

Metchie and Luketa not only benefited from their respective high school experiences. Each left legacies built by the standards they established during their time there.

“It’s funny ... they say you have your 15 minutes of fame and mine is that I got to spend four years with John Metchie, just seeing him grow as a person,” said John Root. “When I see someone with an Alabama T-shirt, you want to tell him about John. It makes you proud to be around that.

“You coach a lot of kids who are good ballplayers who are tough and hard-nosed, but a kid like JM in an instant can change a game. He changed everything. John just epitomizes what every coach wants and we’re just excited for him.”

Similarly, Luketa left a legacy at Mercyhurst that resonates with the program to this day.

“I don’t think I’ve ever seen someone lead like Jesse,” said Jeff Root. “It resonated through the program … it still resonates through our program. I said when he went to Penn State, ‘This is a kid you’re going to fall in love with. He’s going to be a great leader and great in the locker room.’ Now it’s the same thing that he’s going to the NFL. That’s who Jesse is.”

A look at Canadians expected to be selected or receive consideration for this week’s NFL Draft:

Metchie’s third and final season at Alabama ended when he tore his ACL during the SEC Championship Game in December, forcing him to miss an opportunity to participate in his second College Football Playoff National Championship.

Metchie had 155 catches for 2,081 yards and 14 touchdowns during his Alabama career, including a team-leading 96 catches in 2021, garnering second team All-SEC honours. He was recently named winner of the Jon Cornish Trophy as the top Canadian in NCAA football for the second year in a row.

Two-year starter and captain with the Nittany Lions moved from linebacker to hybrid linebacker/defensive end role in 2021, demonstrating his toughness, versatility, and instincts around the ball.

Had 120 tackles his final two seasons at Penn State, including 12 tackles for loss. He received an honourable mention All-Big Ten Conference honour in 2021.

Suffered injuries that slowed his development during his first two seasons at the University of Michigan, where he played sparingly during his junior and senior seasons.

Made the most of a fresh start as a graduate transfer at Wake Forest, leading the team with nine sacks and adding 10 tackles for loss. An impressive pro day helped vault him onto the NFL’s radar.

Was a two-time all-Canadian at the University of Calgary who transferred to Ole Miss when COVID-19 shut down U Sports football in 2020. Started two games at corner during 2020 season. Lauded for his physical tools and ball skills, Leonard had 48 tackles in 11 games during 2021 season.