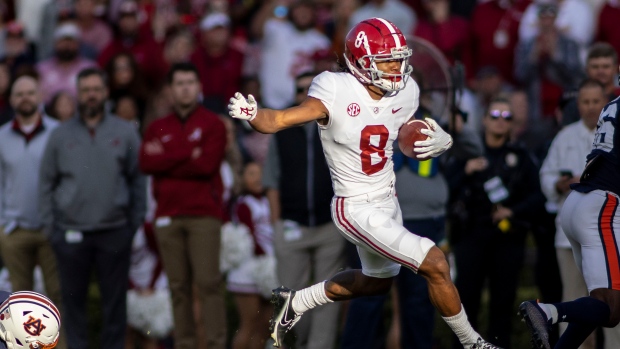 John Metchie has capped one of the great college football careers for a Canadian by being named winner of the Jon Cornish Trophy as the outstanding Canadian in NCAA football for the second year in a row.

Metchie was the unanimous choice of the voting panel, comprised of Canadian media and professional player personnel.

Metchie, who followed his three older brothers into football when he was growing up in Brampton, Ont. had another outstanding season for the University of Alabama Crimson Tide, finishing with 96 catches for 1,142 yards and eight touchdowns.

“It’s always great to be recognized by your country and you peers,” Metchie said in a release from Football Canada. “Just like last year, this is an honour I share with my family.”

In three seasons, he hauled in 155 passes for 2,089 yards and 14 touchdowns, playing his way into the conversation about the very best receivers available for the NFL Draft, which begins on April 28.

Unfortunately, his NFL selection has been clouded by the torn ACL he suffered during the second quarter of the SEC Championship Game on Dec.4.

The Crimson Tide managed to make it to the National Championship game but fell to Georgia in a game where Metchie’s presence was very much missed.

“I definitely have a history of facing adversity both on the field and off of it, and this isn’t anything different,” Metchie said. “Recovery-wise, my knee has been doing really well, and I’m ahead of schedule. No speed bumps over the last four months, and I’ve been running for over a month now.”

The runner-up for this year’s award was Illinois running back Chase Brown. The London, Ont., native led the Fighting Illini with 170 carries for 1,005 rushing yards and five touchdowns this past season.

In the five seasons the Cornish Trophy has been presented, it was won twice by Ohio quarterback Nathan Rourke (now with the BC Lions), once by Oklahoma State running back Chuba Hubbard (now with the Carolina Panthers) and twice by Metchie, who had been projected as a first-round pick before his injury.

The winners represent not only an elite level of talent, but talent outside of the trenches, which is where Canadian players have traditionally made their mark in college football.