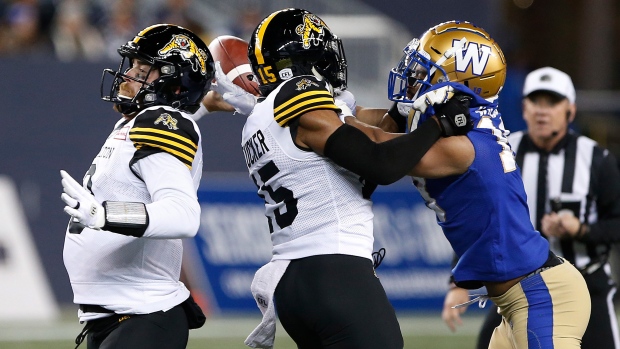 There’s nothing like a championship drought in sports to ramp up the angst at playoff time.

Especially in the Canadian Football League, where, with just nine teams, there’s a reasonable expectation that fans should be able to enjoy a year-end celebration at least once every decade or so.

But for the Hamilton Tiger-Cats it has been two full decades.

That’s recent enough that you still see all kinds of Ticats jerseys around Tim Hortons Field with names like McManus, Flutie and Hitchcock across the back. But there’s been an awful lot of water under the Burlington Skyway since the Ticats defeated the Calgary Stampeders in Vancouver and head coach Ron Lancaster put his hands around the Grey Cup.

Since that great event, the franchise has gone bankrupt once, built a new stadium, gone through eight head coaches and suffered two Grey Cup losses.

The Tiger-Cats reached the championship game in both 2013 and ‘14, losing once in a blowout and once by a hair. But neither of those teams were juggernauts, one coming off a 10-8 regular season and the other a record of 9-9.

But this season has always had the feel of something special, of a team that’s peaking while its best players are still in their primes.

This the best Tiger-Cats team in a generation. With a regular season record of 15-3, it might be the best one ever.

The Winnipeg drought goes back to 1990 and names like Tyrone Jones, Bob Cameron and Chris Walby. To when the head coach was a young man named Mike Riley, just 37 years of age, who would go on to become a coach in the NCAA and the NFL.

But an awful lot of water has passed through the Red River since that hallowed event.

Since then, the Bombers have experienced the CFL’s U.S. expansion era, changed divisions several times, built a new stadium and witnessed the city’s National Hockey League franchise depart and then return.

The drought was almost five years old when CFL all-time great Milt Stegall played his first game in Winnipeg. But he spent his entire 14-year Hall-of-Fame career in Winnipeg without ever putting a ring on his finger. A number of the players on the current Blue Bombers roster weren't alive the last time the Blue and Gold were victorious.

Players and coaches of any team in a championship drought always insist they don’t feel the burden of what’s come before them, but they surely do. It in part defines a team’s relationship with its city, with this generation of players and coaches being expected to help bury the past.

Winnipeg spent the first half of the season as the league’s top team, before stumbling after an injury to quarterback Matt Nichols. Meanwhile, in the East, the Tiger-Cats sustained a season-ending injury to their own starting quarterback, Jeremiah Masoli, but excelled down the stretch under Dane Evans to finish with the league's best record.

One team is at home this weekend, the other on the road. The Tiger-Cats are favourites, the Blue Bombers underdogs.

Two teams that have made a tradition of losing the final game of the season are convinced that this time, nothing can get in their way.

- Will Saskatchewan quarterback Cody Fajardo play? It seems not even the Roughriders know. But he’s sure going to try. The drop-off to Isaac Harker is unpredictable at best and would be a huge blow to Saskatchewan’s chances.

- Can Bombers’ pivot Zach Collaros stay steady? In his two games for Winnipeg, Collaros has been good, if unspectacular. Now he rides back into Saskatchewan, where his season began five months ago.

- How will the Roughriders defend Chris Streveler? He hasn’t practised this week, but the Blue Bombers’ 1A is expected to play on Sunday, ready to try and rumble as he did against the Stampeders. More running back than quarterback, Saskatchewan needs a plan for him.

- Which star defensive end will have more impact? Winnipeg’s Willie Jefferson and Saskatchewan’s Charleston Hughes traded time in the spotlight this season. Both are capable of leaving a mark on this game.

- Which defensive line dominates? The Tiger-Cats and Eskimos are both fierce up front and have the ability to spend lots of time in the opposition backfield.

- Can the Ticats come up with an answer for Trevor Harris? His performance against Montreal on Sunday was all too familiar for Hamilton. Harris, then with the Redblacks, torched the Ticats in last year’s Eastern Final.

- Is Dane Evans ready for this moment? During the regular season, Evans averaged roughly 300 yards passing in two games versus Edmonton, with five touchdowns against one interception. Can he do it with the pressure on him?

- Can the Eskimos keep Hamilton’s explosiveness under wraps? The Ticats had the most 30-plus yard pass plays this season and feature a more potent return game than Edmonton.

Heading into this season, there were only two active CFL quarterbacks who’d ever won a Grey Cup game in which they started – B.C.’s Mike Reilly and Calgary’s Bo Levi Mitchell.

With both of their respective teams done for the season, there will be a new addition to that exclusive club a little over a week from now.

Part of the reason for the club’s slim membership is that so many Grey Cup-winning quarterbacks have retired over the past few seasons, like Ricky Ray, Henry Burris, Darian Durant and Anthony Calvillo.

But there’s no more evidence of how the current crop of top quarterbacks has changed than the fact two of the four No. 1 quarterbacks this weekend – Saskatchewan’s Cody Fajardo and Hamilton’s Dane Evans – were third-stringers at the start of last season.

As this has been the year of the backup quarterback, it’s worth reviewing the guys who will be standing in the wings this weekend:

The Riders hope he’s the backup and not the starter on Sunday. His one CFL start came in Week 21, when the rookie completed 23 of 28 passes in a win over Edmonton.

Streveler is not your traditional backup because it won’t take an injury to see him on the field. Rookie McGuire backs-up Collaros and Streveler, having attempted just three passes in his rookie season.

He started the season finale against Toronto. The rookie has attempted 30 passes, throwing four interceptions without a touchdown.

Kilgore is in his fourth year in the league. He has started five games for Edmonton, including both against the Tiger-Cats this season. He has six touchdown passes against nine interceptions this season.

Calgary Stampeders head coach Dave Dickenson went on a rant this week, criticizing the league for now providing a “NFL window” for all players, regardless of their contract status with their CFL teams.

“I personally think it’s asinine that the league allows this, personally," Dickenson told Postmedia’s Danny Austin in Calgary on Monday. "Why do we let these guys get out of these contracts? I have no idea … As a coach, you like to have at least an idea of who your team is going to be, so I don’t know why we do that and allow that to happen. The CFL needs to take some pride and believe this is a great league and that people want to play in our league."

The CFL used to allow players entering the final year of his contract an opportunity to sign an NFL deal during the early winter. But the league did away with that in 2012, and then brought it back in August of 2018, applying it to all contracts signed from then on.

The result of the new policy will mean more uncertainty for CFL teams. The league will certainly see more players trying to take advantage of scoring a bigger payday, like recent CFLers Alex Singleton, Duke Williams and Diontae Spencer managed to do this season.

While Dickenson was incredulous, he’s actually in the minority. It seems that six of the nine CFL teams would rather give players their NFL freedom as an enticement to get them to the CFL in the first place.

It’s always been a divisive issue among CFL teams, and continues to be.

The future of Khari Jones

Comments Friday morning from Als president Patrick Boivin and head coach Khari Jones suggest the two sides are closing in a new contract, which is important news for the franchise.

Jones was the catalyst for all that went right in Montreal this season, and the expressions of support he received from his players only boosted his leverage.

The issue has always been the fact that Montreal has no GM for next season, with the ownership matter still unsettled and interim GM Joe Mack not planning to be back.

Jones has had a lot of leverage in this situation. The fact he's willing to sign without knowing who his boss speaks to his desire to return to Montreal. It also indicates that the Als must have stepped up their commitment to him, both in terms of compensation and term.