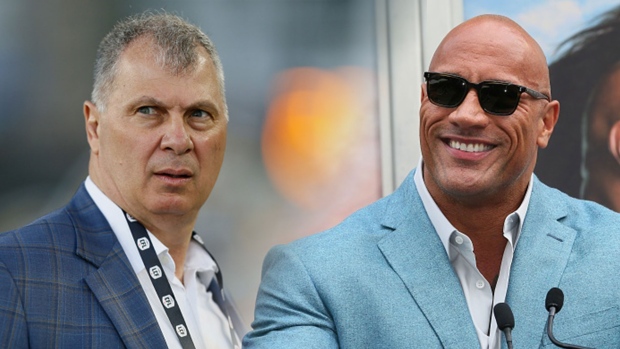 Randy Ambrosie and The Rock , TSN.ca

For many, the raging debate about the Canadian Football League’s potential alignment with the XFL boils down to a choice of either staying Canadian or selling out to be part of another attempt at alternative professional football in America.

What’s been largely ignored in that conversation is the idea that XFL and CFL leadership share a similar vision of professional football going global.

Beyond the XFL-CFL merger itself, the new collaboration could be a launching point to aggressively pursue franchises in places such as Mexico, Germany and other European countries.

It’s only a tiny leap of faith to believe that whatever is on the table between the CFL and XFL has a considerable international component to its vision.

All the clues are there.

CFL commissioner Randy Ambrosie has been hanging his hat on the international potential of his league since early in his term, forging relationships with football federations around the world and spearheading the introduction of global players.

Like it or not – and there are plenty within and beyond the league who don’t – it’s the one thing that has defined his commissionership thus far.

What’s never been clear is how the CFL was going to monetize that international potential with a nine-team league of franchises in Canada.

The league’s global players have had minimal impact so far and, while that may change, it feels like a stretch to believe their mere presence can drive demand for distribution and revenues from their respective native lands. That’s why the biggest complaint about Ambrosie’s global vision is that it lacks the financial returns to justify the effort – especially in a league without money to spare.

Could a collaboration with the XFL and a shared global vision be the vehicle to allow Ambrosie to pursue this in a more meaningful and impactful way? The idea of putting teams in foreign markets would seem to have more potential than expecting international fans to follow a nine-team league in Canada simply because it includes a few of their countrymen.

But would the XFL be on board with such a vision? Again, all the clues say yes.

Start with Dany Garcia, co-owner of the XFL and the CEO of the Garcia Companies, a holding company with a portfolio that includes TGC Management, a global brand development and management company.

This was her tweet on the morning of March 10, the day formal talks between the XFL and CFL were made public:

Further, Garcia added that day during an interview with TSN that the CFL’s international partnerships were something that helped bring the XFL leadership to the table. The XFL’s other co-owner, Redbird Capital, has investments in two European soccer teams and this spring purchased 30 per cent stake of Wasserman Media, a sports marketing and talent agency with international interests. It also doesn’t hurt that both the brand and primary businesses of XFL co-owner Dwayne ‘The Rock’ Johnson – pro wrestling and motion pictures – are global as well.

The two leagues don’t share the same number of downs, but they do share a vision for international pro football. So, what are the chances they’re exploring that together? Pretty good. The question is: Can this really work?

It’s worth recalling that the NFL has failed twice in Europe, first with the World League of American Football, and then with NFL Europe.

Both of those were truly development leagues, created and managed by the NFL as a laboratory for available talent, with hopes as well to grow the game internationally. But it was as close to a farm system as there’s ever been in pro football.

An XFL-CFL collaboration would be independent. And while the goal of players would certainly be to move on to the NFL, there’s no sense that the two sides are trying to form a development league.

Meanwhile, the game of football has made great inroads around the world over the last generation. So much so that players are starting to come from Europe into the upper levels of NCAA football, the same way they started to in basketball by in the 1980s.

Many NCAA teams now recruit in Europe. The first European-trained quarterback in Power Five conference history, Germany’s Alexander Honig, will be a freshman at TCU this fall. The NFL Academy, established in London in 2019, has begun producing NCAA-level talent as well. One of its quarterbacks, George Reynolds of Kent, England, will attend the University of Ottawa this fall.

There is no question the game is growing internationally. There is a five-year-old pro league in Mexico, and the newly minted European Football League, made up of teams from Germany and Poland, will begin is first season in June.

It may seem like a far-fetched idea today but could the XFL-CFL collaboration lead to a league with a third of its teams in Canada, a third in the U.S, and a third elsewhere? A global league, playing opposite the NFL calendar, drawing television revenues and sponsorship from several countries, reinforced by sports wagering interest from around the world?

Ambrosie wasn’t wrong when he looked beyond Canada’s border and saw a world of potential for his nine franchises. He just couldn’t find a way to get there fast enough.

So, if doing a deal with the XFL can buy him the time and platform to pursue his vision, that may be exactly what he’s prepared to do.