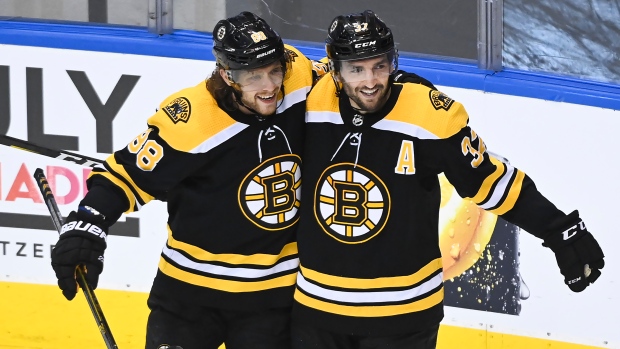 TORONTO — The Boston Bruins look as if they've moved past their shaky post-season start.

Patrice Bergeron broke a tie with 3.5 seconds left in the second period, David Pastrnak returned with two assists and the Bruins beat the Carolina Hurricanes 2-1 on Wednesday to win the first-round playoff series in five games.

David Krejci also scored one of two power-play goals in the second period for the Bruins, who trailed 1-0 entering the final 5 minutes before the second intermission. It marked their second comeback in three days, the first when they rallied from a 2-0 deficit with a dominating third-period performance to win Monday's Game 4.

“You’ve got to find ways to win, I guess that's probably the best way to put it," Bruins coach Bruce Cassidy said. “We found ways to win, probably different ways each game: different people in the lineup, different goaltenders playing. So that was the best part of this first round. I think our lineup now will get a little more solidified as we go.”

The Bruins entered the post-season as the Presidents’ Trophy winner with a league-best 100 regular-season points, only to go 0-3 in the round-robin series to determine the top four seeds in the Eastern Conference playoffs. There was also the surprise news that goaltender Tuukka Rask was opting out of the playoff run to be with his family shortly before Game 3.

Now Boston, which lost in a seven-game Stanley Cup final to St. Louis last season, are advancing after winning the last three games since Rask's departure.

“They did what they do to be successful,” Hurricanes coach Rod Brind’Amour said. “And sometimes we tried to do too much. We got off of our game.”

The Bruins trailed 1-0 entering the final 5 minutes of the second period before scoring twice on the power play, first from David Krejci with 4:40 left after Bergeron drew a penalty on a breakaway chance.

Then came Bergeron’s score as the teams appeared headed to the second intermission tied at 1. He tracked down a loose rebound from Pastrnak that hit the boards, then quickly sent the puck back toward the net from the left side.

The puck slipped under a standing Petr Mrazek, bounced off his left skate and straight into the net for the 2-1 lead.

“I saw that ... he was standing up, so I was trying to catch him, throw it at his feet and see what happens,” Bergeron said. “I knew there wasn’t that much time left in the period. I said, ‘Why not try it,’ just because it was kind of a desperate play with a couple of seconds left. I knew we couldn’t really set it up and have another shot."

Bergeron and Krejci also had an assist each for the Bruins, while Pastrnak’s return to the lineup also provided a boost. After scoring 48 regular-season goals, he hadn't played since the fourth-seeded Bruins won Game 1 in double overtime and was a gametime decision for this one.

The fifth-seeded Hurricanes were trying to regroup from fading against the Bruins in the third period of Game 4, which Brind'Amour had called “tough to watch.” They responded by taking a first-period lead on Haydn Fleury’s goal, but they didn’t score again as the Bruins gradually climbed past them.

Mrazek had 25 saves for the Hurricanes, including a pair of stops on 1-on-1 chances for Pastrnak. The Hurricanes swept the New York Rangers in the best-of-5 qualifying series to start their time in Toronto, but ultimately lost to the Bruins in the playoffs for the second straight season.

“They did it better, more consistently through that series than us,” Hurricanes captain Jordan Staal said. “We looked like a team that could win the series at times.”

NOTES: Jaroslav Halak had 23 saves for Boston, which swept Carolina in the Eastern Conference finals last season. ... Carolina played without 20-year-old winger Andrei Svechnikov for the second straight game. He went down late in Game 3 after his leg twisted awkwardly beneath him late in the third period after tussling with Zdeno Chara for position. ... Staal played after being knocked from Game 4 on a jarring third-period hit from Charlie McAvoy. ... The Hurricanes were without D Joel Edmundson for the fourth straight game. ... Sebastian Aho and Jordan Martinook assisted on Fleury's goal for Carolina.