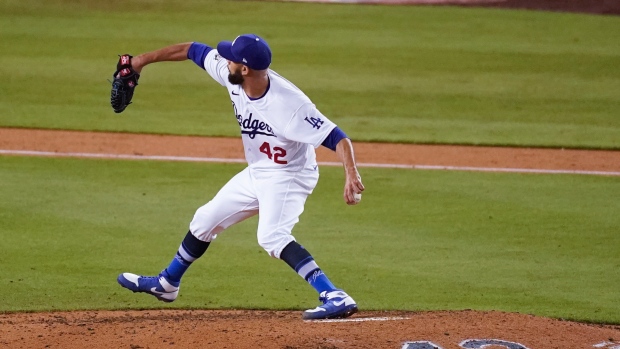 LOS ANGELES — Justin Turner and Max Muncy each hit a three-run homer, and the Los Angeles Dodgers beat the Colorado Rockies 7-5 on Thursday night as David Price earned his first regular-season save.

Muncy's two-out drive in the seventh inning off reliever Yency Almonte (0-1) gave the defending World Series champions a 6-5 lead on the way to their sixth straight victory.

Price pitched out of trouble in the ninth, striking out two. Primarily a starter throughout his 13-year career, the left-hander has moved into a relief role this season because of the Dodgers' stacked and star-studded rotation. His only other save came as a rookie with Tampa Bay in Game 7 of the 2008 AL Championship Series against Boston.

Jimmy Nelson (1-1) worked a hitless inning in relief of starter Julio Urías and the Dodgers (11-2), with the most wins in the majors, won at home on Jackie Robinson Day.

Nursing a one-run lead, the Dodgers made two errors in the sixth and the Rockies scored three times to take the lead. Zach McKinstry bobbled a ball in right field, allowing one run to score, and Chris Taylor's throwing error gave Colorado another.

McMahon hit a first-pitch homer off Urías in the first inning for a 1-0 lead. It was McMahon’s sixth home run of the season. Hampson hit a solo shot in the third to make it 2-0.

Turner connected in the bottom of the third to put Los Angeles ahead. A notoriously slow starter, the third baseman has four home runs already. He homered for the second time in two days, with his drive a day earlier landing in a fan's plate of nachos.

Dodgers: INF Gavin Lux was scratched from the lineup with right wrist soreness. ... RHP Brusdar Graterol will be joining the team Friday in San Diego as part of the taxi squad.

Rockies: RHP Chi Chi Gonzalez (1-0, 3.60 ERA) makes his second start of the season Friday night at Coors Field against the New York Mets, weather permitting. In his last start, he allowed one run over five innings against San Francisco.

Dodgers: RHP Walker Buehler (1-0, 1.50) gets the start at San Diego in the first of 19 highly anticipated games between the NL West rivals this season. His last start against the Padres was Game 1 in the 2020 NLDS, when he allowed one run and two hits over four innings. He struck out eight and walked four.