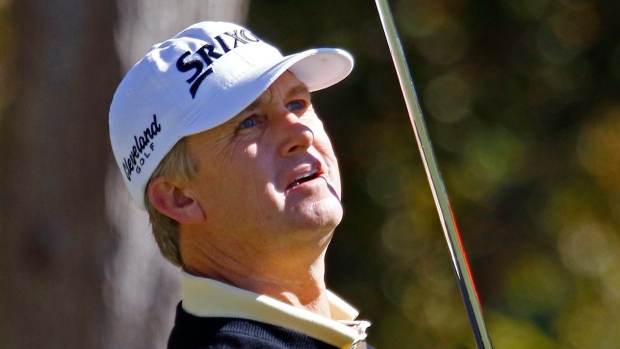 DULUTH, Ga. (AP) — David Toms ran off three straight birdies after a rain delay and closed with a short birdie when he judged the wind right, giving him a 7-under 65 and a share of the lead with Ken Duke after one round of the Mitsubishi Electric Classic.

Duke was first off at No. 1 on the TPC Sugarloaf and dropped only one shot. Equally important was finishing with pars in a strong wind after the rain stoppage.

Steve Flesch had a 67. Steve Stricker, in his second PGA Tour Champions tournament after being out six months recovering from an illness that caused him to lose 25 pounds, was in the group at 68. Stricker is coming off a runner-up finish last week.

Canada's Stephen Ames shot a 73 Friday and is tied for 43rd.

Toms chose to take a cart, allowable on the 50-and-older circuit though rare for him, mainly because the other two players in his group were in carts and he feared a long walk back to the clubhouse knowing a rain delay was inevitable.

He realized they were in for a long slog — Sugarloaf, which formerly hosted a PGA Tour event, is more than a nine-mile walk from the first tee to the 18th green — when it got so wet that carts were no longer allowed in the fairway.

He made three straight birdies after the delay and felt solid the rest of the way, picking up three more birdies on the front nine before the wind got stronger.

“You were just hanging on for dear life,” he said. “I was fortunate to make a couple of long par putts that kept the round going.”

One of those was on the 421-yard seventh hole, where Toms said his approach could have been anything from a wedge with the wind at his back to a 6-iron if it was in his face. He just wasn't sure which direction it was going.

“It was just all over the place,” Toms said. “I pulled a 7. I thought I hit a great shot and it ran through the green, had a tough up-and-down and I made probably about a 12-foot par putt there to kind of keep me going.”

And then on his final hole, the 453-yard ninth, he judged the wind right for a shot to a front pin and made birdie from short range for is 65.

Duke had five birdies on the front nine, making his lone bogey on the 221-yard eighth hole when he missed the green.

Players could lift, clean and place their golf balls in the fairway because of the weather.

“Ball in hand, the wind didn’t pick up until later in the round, greens are absolutely perfect here at TPC Sugarloaf. You get ball in hand for a lot of these players out here, they’ll shoot a good score,” Duke said.