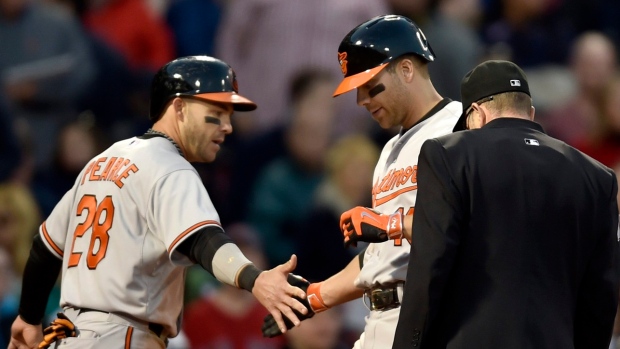 BOSTON - Chris Tillman couldn't wait to get back onto the mound after his shortest start in over three seasons.

Tillman (2-1) rebounded from a rough outing and helped lead the Baltimore Orioles over the Boston Red Sox 4-1 Saturday.

In his first start of the season, at home last Sunday, Tillman allowed seven runs in 2 2-3 innings in a 10-7 loss to Toronto.

"I wanted to get back out there. It felt like an eternity between starts," he said after giving up one run in 5 1-3 innings against Boston.

"After starts like that, it's not fun," he said. "You just want to get back out there and help the team."

Chris Davis hit a two-run homer, and Adam Jones had three singles for the Orioles, who moved back over .500 at 6-5.

Tillman's start against Toronto was his shortest since August 2011.

"I thought he had good stuff," Orioles manager Buck Showalter said. "I think he was challenged by things out of his control."

David Ortiz went 3 for 3 with a double and two singles for the Red Sox, who lost for the third time in their last nine games. Brock Holt had three singles.

Clay Buchholz (1-2) allowed two runs and 11 hits in six innings and is winless since beating Cole Hamels in Philadelphia on opening day. He gave up nine runs in 3 1-3 innings in a loss at Yankee Stadium last Sunday.

Buchholz laboured through his innings, taking lengthy periods between pitches with runners on base.

"I went through a rough outing my last time out," he said. "I was more thinking pitch to pitch, get a ground ball, not give in — I wasn't going to give in to anybody, regardless of bases being loaded or not. They're going to have to hit a good pitch."

With the Orioles leading 2-1 in the ninth, Davis hit an opposite-field off Robbie Ross Jr. into the first row of Green Monster seats in left field.

Manny Machado's run-scoring groundout and Caleb Joseph's RBI single put Baltimore ahead in the fourth. With the bases loaded and one out, Buchholz struck out Alejandro De Aza and Steve Pearce.

Baltimore loaded the bases with no outs in the fifth, but Machado bounced into a 3-2-3 double play and Ryan Flaherty struck out.

Boston closed in the sixth when Ortiz doubled and scored on Pablo Sandoval's slow roller down the first-base line.

Orioles: Baltimore placed 2B Jonathan Schoop on the 15-day DL before the game and recalled infielder Jimmy Parcedes from Double-A Bowie.

Red Sox: OF Shane Victorino was a late scratch with bruised ribs. He crashed into a wall in Friday's game, attempting to catch Joseph's homer while leaping at the short wall near the Pesky Pole. ... C Ryan Hanigan took a foul ball of his right (throwing) hand but stayed in the game.

PICK UP THE PACE

Buchholz took what seemed like a very long time between pitches with runners on.

GO THE OTHER WAY

Davis was happy he was able to hit a homer to left as he works through a slow start.

"I'm trying to stay on the ball as long as I can," he said. "I finally got in a favourable count, had a pitch and was able to drive it."

He was hitting .235 with just one homer and five RBIs coming in.

Red Sox: RHP Rick Porcello (1-1, 3.86) is slated make his second Fenway Park start for the Red Sox on Sunday. He pitched eight innings in the home opener on Monday, getting his first win in a Boston uniform.