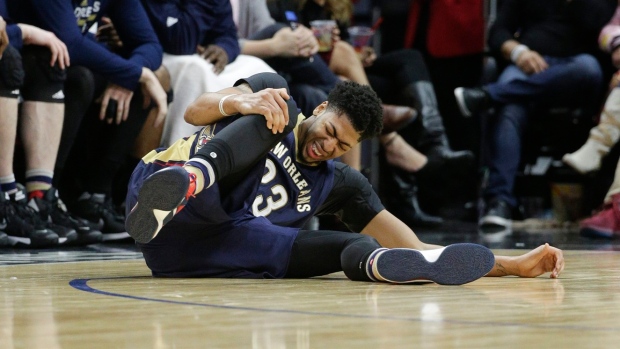 LOS ANGELES, Calif. - Doc Rivers rested all of his starters throughout the fourth quarter against New Orleans on Friday night, a rarity for the Clippers coach this season.

The Pelicans played the fourth without Anthony Davis, and coach Alvin Gentry hopes they won't be without him much more than that.

Blake Griffin and J.J. Redick each scored 20 points, Chris Paul had 17 points and eight assists and the Clippers routed the undermanned Pelicans 111-90.

Davis was carried to the dressing room with 2:48 left in the third quarter because of a bruised right knee. The Pelicans young star collided with Paul while the All-Star point guard was dribbling up court.

The Pelicans were trailing 80-63 at the time, and Davis had 17 points and six rebounds in 28 minutes.

Gentry said Davis will be evaluated Saturday and that he will "know more then when the medical people speak about it."

Already this month, Davis has come out of games because of a bruised hip and an injured left shoulder.

"I've got to be on the floor. We have a lot of guys hurt. I can't afford to go down," Davis said.

Griffin scored 40 points against Utah on Wednesday night in a 102-91 loss that began this six-game homestand. In this one, he made 7 of 15 shots to help fuel the Clippers' sixth straight home victory over New Orleans.

"I thought our energy was great tonight and our defensive energy was really good," Rivers said. "We got our in transition, which is something we've talked about all year but really haven't done. Tonight we put a lot of pressure on their defence."

Former Clipper Eric Gordon had 16 points for the Pelicans, who had won three in a row.

Los Angeles used 15 points by Redick and 13 each from Paul and Griffin to take a 63-42 halftime lead, ending the second quarter with a 19-4 run that included eight points by Redick in a 46-second span.

"I wish we were like this every night," Paul said. "I think we defended pretty well, moved the ball and made shots. Most of all, we sustained it, pretty much."

DeAndre Jordan had eight rebounds and six points during the first 8 minutes, helping the Clippers build an 11-point margin.

Pelicans: Gentry's teams are 14-5 against the Clippers, whom he coached for three seasons. ... The Pelicans came in allowing a league-worst 109.3 points per game. ... Former UCLA guard Jrue Holiday was limited to seven points and three assists during a foul-plagued 13 minutes. Ryan Anderson had nine points on 3-for-14 shooting.

Clippers: Paul came in with a career assist-to-turnover ratio of 4.12, third-best in league history behind Muggsy Bogues (4.69) and John Paxson (4.24). ... The Clippers haven't outrebounded an opponent in any of their first 16 games. Last season they were 32-8 when they won the battle of the boards. ... In head-to-head matchups between Griffin and Davis, the Clippers are 8-1. ... C Cole Aldrich, picked 11th overall by the Pelicans in 2010 and traded to Oklahoma City on draft night, has played in only five games with the Clippers (18 minutes).

"It's not the loss that matters the most, but how it happened and the approach that we had," Gentry said. "I didn't think we competed at the start of the game like we need to. They physically took us out of the game, and it really got out of hand right from the start."

New Orleans centre Kendrick Perkins missed his 13th game because of an injured right pectoral muscle. Tyreke Evans, working his way back from arthroscopic surgery on his right knee last month, has not played this season. Neither has Norris Cole (sprained left ankle) nor Quincy Pondexter (left knee).

As a result, Gentry has used 11 different lineups. Gordon is the only player to start all 16 games, and guard Toney Douglas is the lone player on the active roster who hasn't started one.

Pelicans: At Utah on Saturday night.