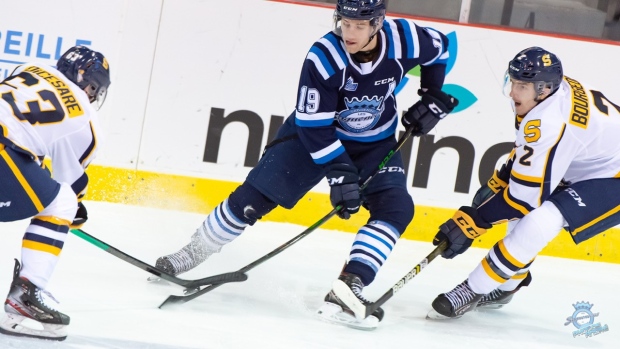 Dawson Mercer is at peace outdoors.

“I enjoy taking my dog for a walk, going out on my dirt bike, skidooing in the wintertime, fishing, I just enjoy it,” the Chicoutimi Sagueneens forward said. “It's really relaxing and helps clear my mind.”

After the Quebec Major Junior Hockey League season was suspended in March due to the COVID-19 pandemic, Mercer made the most of his time at home in Bay Roberts, N.L.

"I had a salmon fishing trip with my uncles and cousins," Mercer recalled. "I really enjoy cooking out in the woods, sleeping in a tent, waking up early in the morning at 4 a.m. and going to the river to get a good spot. It's something that really brings joy to me and it's nice to get that refreshing feeling."

Mercer won't be enjoying any fresh air until next week. He is one of 46 players currently in quarantine at Hockey Canada's World Junior selection camp in Red Deer, Alta. Two players tested positive for COVID-19 last week and all the other players and staff were deemed close contacts and must stay in their hotel rooms for 14 days.

Everyone is coping with quarantine a little differently. During an interview on the Jay and Dan Podcast this week, Saginaw forward Cole Perfetti, Winnipeg's first-round pick in October's National Hockey League draft, revealed he was missing fresh air so much that he had his mom send him a diffuser. The windows of their hotel rooms don't open.

Mercer, meanwhile,​ was unfazed by the development. After all, he's quickly becoming an expert in isolation.

"When this quarantine is over I'll have eight weeks totalled up of doing quarantine in the pandemic," Mercer said. "Two weeks when I went home, two weeks when I came back for training camp, two weeks before I came here [after a member of the Sagueneens ​staff tested positive] and now two weeks again, so I'm getting pretty used to it."

Mercer, who played five regular-season games with Chicoutimi this season, fills the time by talking with family and friends as well as his fellow Team Canada campers. He's also rediscovered an old hobby: drawing.

"Growing up I enjoyed it," he said. "I would draw whatever came to mind, whether it was hockey images that I liked or outdoors stuff or just cartoon characters."

As his hockey career advanced and his schooling moved more online, Mercer turned away from pencils and paper. But now he's back at it and picked the perfect project for this week. He's drawing a picture of him holding a salmon during the summer trip. If you can't go outside, why not bring the outdoors to you?

"He's a pretty talented person," Mercer said. "We had the opportunity to listen to what he had to say about where he's come from and the path to where he is today. Having guest speakers like that can really lighten the mood and put a smile on our faces."

Talking to Mercer is in some ways like a breath of fresh air. In classic Newfoundland tradition, he’s friendly, polite and optimistic.

"He is the nicest guy in the world," said Kings prospect Akil Thomas, who roomed with Mercer at last year's World Juniors. "Not a mean bone in that guy's body. He's going to be relied on to be that energy player, so looking forward to watching him play. I think he's got an important goal in him this year. I'm calling it now."

Thomas knows something about what it takes to score a clutch goal. Despite starting last year's World Juniors on the fourth line, the forward from Toronto scored the winner late in the third period in the gold-medal game against Russia.

Mercer also authored an underdog story last year, earning a roster spot as a rare draft-eligible player on Team Canada despite not being invited to the summer camp. This time around, as one of six returning players at camp, he'll be expected to help lead the way. And he's already doing just that. The New Jersey Devils first rounder was among the standout performers during the two Red-White scrimmages before the quarantine.

"I kept on maturing my game," Mercer said of his off-season evolution. "I'm that complete, 200-foot player and just been adding that extra bit of intensity, work and moving up the scale. With the added strength from the summer I feel like I'm way more of a dominant force out there."

"He has a versatility in his game that allows him to move up and down the lineup and all through the lineup and contribute in significant areas," observed TSN director of scouting Craig Button. "His attention to detail is excellent. How many times do we hear coaches talk about 'Play the game the right way'? That’s exactly what Dawson does. It doesn't matter what the situation is or where he is on the ice. You can count on him to make the right play."

“Like the province he is from, he’ll be a rock for Team Canada...”

With the #WorldJuniors coming, @CraigJButton provides scouting reports on some of its key 🇨🇦 players.

"I like working on those different details and plays that might not happen all the time, like being able to use your feet to get the puck back," said Mercer, who points out he played soccer as a kid. "Picking up pucks on your feet or knowing that you have to take the puck out of the air or lie down to get the puck back. I think it comes from my IQ and just seeing that play developing."

But, more than anything, Mercer is a battler. Don't let the Newfoundland nice personality fool you, the 6-foot, 173-pounder is looking to reel in more than fish. He's looking for another gold medal.

"I still bring that joy-ness and happiness," he said of his approach. "This is what I love to do, but at the same time I'm a really competitive player. I want to win. I hate to lose.. I want to win the most so every time I step on the ice that's the mode I go in. I want to have no regrets and having that full intensity is how I really get the best out of it."