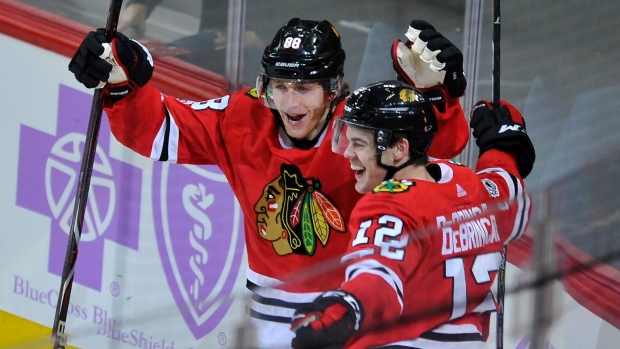 CHICAGO — Alex DeBrincat has terrific hands, good speed and the instincts of an elite scorer.

DeBrincat had three goals and an assist, Patrick Sharp stopped a 16-game scoring drought and the surging Chicago Blackhawks beat the Anaheim Ducks 7-3 on Monday night.

"Pucks were bouncing my way today," DeBrincat said. "It's cool to get that over with."

DeBrincat, who turns 20 on Dec. 18, became the second-youngest player in franchise history to record a hat trick, trailing Jeremy Roenick by four days. He has nine goals and three assists in 11 November games.

"He's a great player," Sharp said. "You could tell that in training camp whenever he got the puck. He just has poise with it. He's looking to make a play. I said earlier he's playing like he's in junior hockey still, and that's a compliment. He's looking to make those plays. He's not intimidated with the speed or the pace of the game. You can see the results."

The banged-up Ducks dropped their fourth consecutive game. Ryan Kesler, Ryan Getzlaf and Patrick Eaves remain out with long-term injuries, Rickard Rakell missed his second straight game with an upper-body injury and defenceman Brandon Montour left midway through the third, favouring his right side as he skated off the ice.

Chris Wagner had two goals for Anaheim, and Jakob Silfverberg had a goal and an assist. John Gibson made 18 saves on 22 shots before he was replaced by Ryan Miller in the second period.

"To tell the truth, I thought it was a mercy pull," Ducks coach Randy Carlyle said. "I told him, we're not going to leave any goaltender in that situation where we're going to leave you hanging high and dry like that. We didn't think that we were playing very well in front of him and I felt that they both should share in the responsibility of the hockey."

Chicago grabbed control with three in the first period. Sharp beat Gibson on a one-timer at 8:57 for his first goal since Oct. 14. DeBrincat then scored his eighth of the season off a slick pass from Schmaltz, and Saad made it 3-0 when he stole the puck from Derek Grant and banked one in off the left post with 1:49 left in the period.

The Blackhawks were only getting started.

"We played pretty well last game and we think it's going to be easy," Wagner said. "I don't know why we wouldn't be mentally ready. There's no rhyme or reason. It's not going to get any easier. We might as well start competing now in the right way."

Silfverberg got one back when his centring pass went off the stick of Chicago defenceman Brent Seabrook and in 6:14 into the second. But DeBrincat responded with a rebound goal and then scored again off a pass from Kane, making it 6-2 at 14:14.

Schmaltz added his fourth of the season at 5:48 of the third, tapping in a beautiful pass from Kane.

"It's fun when we're playing like that," Schmaltz said. "Everybody's having fun and making plays. When you hold on to the puck, it's a lot of fun."

NOTES: Carlyle thought Montour would be OK. "He was taking his skates off when I walked in and he was functioning well, so I don't think there's anything too major," he said. ... The Ducks also played without Fs Jared Boll (lower body) and Ondrej Kase (upper body). ... The Blackhawks scratched D Michal Kempny, C Tanner Kero and D Jordan Oesterle. ... Chicago G Anton Forsberg, who likely will start Tuesday against Nashville, celebrated his 25th birthday.