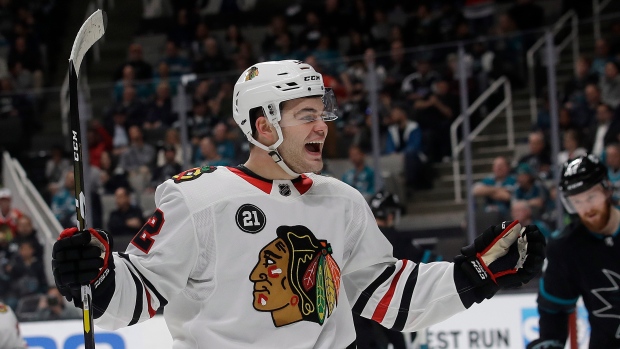 The 21-year-old DeBrincat started a three-goal barrage in the first 11 minutes of the game and added another in the second period. Connor Murphy, Jonathan Toews and Chris Kunitz also scored to give the Blackhawks just their second win in the past six games.

The recent slump has put a major dent in Chicago's playoff hopes. The Blackhawks trail Colorado by five points with five games remaining in the race for the second wild-card spot in the Western Conference.

The Sharks' longest losing streak in six years has likely cost them a chance at a Pacific Division title and could cost them home-ice advantage in the first round of the playoffs if they don't reverse it soon. San Jose trails first-place Calgary by six points and is five points ahead of third-place Vegas with five games remaining.

The Blackhawks got off to a fast start thanks to a two-man advantage following a goaltender interference penalty on Marcus Sorensen and a high-stick call against Brent Burns. DeBrincat capitalized by knocking in his own rebound.

Murphy and Toews then added even-strength goals that game Chicago a 3-0 lead less than 11 minutes into the game. The Blackhawks had gone six straight games without reaching the three-goal mark.

But the Sharks erased that entire deficit and tied the game at 4 late in the second period. Hertl set up Nyquist's power-play goal with a blind pass and scored one of his own off a feed from Joe Thornton.

Logan Couture then set up Meier alone in front after a Chicago defensive breakdown to even the score.

But the Blackhawks went back ahead about two minutes later when Patrick Kane innocently sent in a backhand from the point that Kunitz deflected past Jones to make it 5-4.

But the game tightened up in the third period and Kunitz's goal proved to be the game-winner.