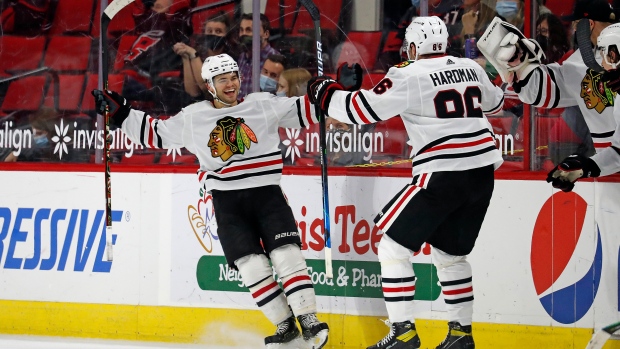 RALEIGH, N.C. — Alex DeBrincat beat Petr Mrazek at 2:02 of overtime to help the Chicago Blackhawks rally past the NHL-leading Carolina Hurricanes 2-1 on Thursday night, salvaging the final game of a three-game set.

Collin Delia had 36 saves for the Blackhawks, who were eliminated from post-season contention Monday to start the series and gave up 11 goals in the first two losses to the Hurricanes.

“It’s nice to see our guys get rewarded, because I thought over the three games we played a lot of good hockey here,” Blackhawks coach Jeremy Colliton said.

This time, the Blackhawks found themselves facing a 1-0 deficit until deep into regulation despite getting numerous rushes and breakaway chances. Riley Stillman's redirect marked his first NHL goal at 16:59 of the third and tied the game.

Then DeBrincat fired one from between the circles past Mrazek — who went from flirting with a shutout to taking a loss — to end a six-game skid.

Martin Necas scored a short-handed goal for the Hurricanes, who are chasing the Presidents' Trophy. They had won five straight and this marked their 13th straight game with at least a point in the standings, though they stumbled to close their regular-season home slate.

“We needed to get our butts kicked, to be quite honest with you, just so we can show, like: ‘This is not how it works,’" Carolina coach Rod Brind'Amour said, adding: “We can't play like that certainly next week, that's for sure.”

Necas got the Hurricanes on the board with a strong individual effort, aided by an awkward collision between Chicago defenceman Duncan Keith and a linesman.

Keith stumbled as he tried to corral the puck near the blue line on a power play. As he fell, the lineman's knee hit Keith in the helmet as he tried to get out of the way, allowing Necas to skate in and collect the unclaimed puck.

Necas finished it off for the short-handed goal at 9:49 for the first. But the Hurricanes didn't find the net again against Delia, who hadn't played since January before taking over midway through Monday's game with Chicago down 4-0.

“I think the team just absolutely battled, and I think we deserved that," Delia said. “And I was just happy to be a part of that.”

Keith didn’t return to the bench for the second period and was ruled out for the game, though the team didn’t specify the issue.

Chicago also lost forward Brett Connolly late in the second period when he collided with Carolina's Steven Lorentz and ended up face down on the ice. He was eventually helped to the tunnel with 2:20 left and was ruled out for the third.

Colliton said afterward that both players were dealing with concussions.

Earlier Thursday, the team said centre Kirby Dach would miss the game as well as the final two games against Dallas. In a statement, team physician Michael Terry said Dach had aggravated a right wrist injury and was having “some post-operative discomfort.”

Mrazek finished with 25 saves for Carolina in his second appearance since missing time with a lower-body injury. That included stopping a breakaway shot from Patrick Kane right before the horn to end the second.

“He made some big saves,” Necas said. “We didn't help him enough. We gave up too many grade-A (scoring chances). We've got to figure it out in the last two games. There is no chance we can play like that in the playoffs.”

Carolina entered Thursday with 79 points. That was three more than Vegas for the league lead and four more than fellow Central Division teams Tampa Bay and Florida.

Carolina was the only one of those teams in action Thursday night.

Blackhawks: Host Dallas on Sunday to start a home doubleheader to close the schedule.

Hurricanes: Visit Nashville on Saturday to start a two-game set that closes the regular-season schedule. The Hurricanes have won all six meetings this season.