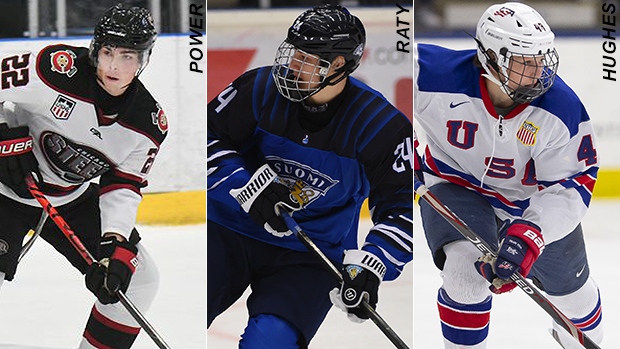 Finnish centre Aatu Raty sits in the top spot, but TSN Hockey’s early look at the 2021 draft class suggests it’s going to be a good year for teams looking to boost their blueline.

Seven of the top 15 players in our rankings are defencemen, and the class is stacked with players who possess the attributes NHL teams are looking for at that position.

Raty is a highly skilled centre who plays and thinks the game with pace. The 6-foot-1, 177-pound Karpat pivot is a threat all over the ice, which makes him difficult to stop.

Hulking Chicago Steel (USHL) defenceman Owen Power leads the parade on defence, sitting at No. 2 in our rankings. The 6-foot-4 ½, 213-pound blueliner from Mississauga, Ont., shows outstanding sense and feel for the game, which allows him to dominate. When you combine his poise in all situations with his considerable size, you get a player who commands space and makes life very difficult for opponents.

Simon Edvinsson (No. 3) is another big, rangy defenceman who makes things look easy with his skating and mental acumen. The 6-foot-3, 176-pound Edvinsson is playing for Frolunda’s J18 team this season and has turned some heads at the 2019 World U17 Hockey Challenge.

I only saw SWE U-17 team play one game — so tiny sample size qualifier duly noted — but three players who really jumped out were dynamic winger Fabian Lysell, towering d-man Simon Edvinsson and goalie Carl Lindbom. All three were exceptional in win over Team CAN Red.

Alberta Junior Hockey League defenceman Corson Ceulemans is at No. 4, a right-shot defenceman who has the attributes to play on the top pair at the next level. Ceulemans, who has 12 points in 14 games for the Brooks Bandits this season, is calm when he needs to be and shows and an understanding of all the situations in the game to make a strong contribution.

Rounding out the top five is another right-shot Canadian defender in Barrie Colts blueliner Brandt Clarke. The Nepean, Ont., native plays with a boldness and confidence that allows him to make a difference at all times.

And it wouldn’t be an NHL draft preview without a Hughes to discuss. The third and final brother in the next great NHL family sits at No. 8 in our rankings.

Luke Hughes, currently playing defence for the USA Hockey National Team Development Program Juniors, is set to follow in the footsteps of his older brothers, Quinn (seventh overall in 2018) and Jack (first overall in 2019).

A certain first-round pick in 2021, Luke has excellent puck skills and the ability to perform magic when the puck is on his stick. He has 17 points (seven goals, 10 assists) in 17 games played this season.