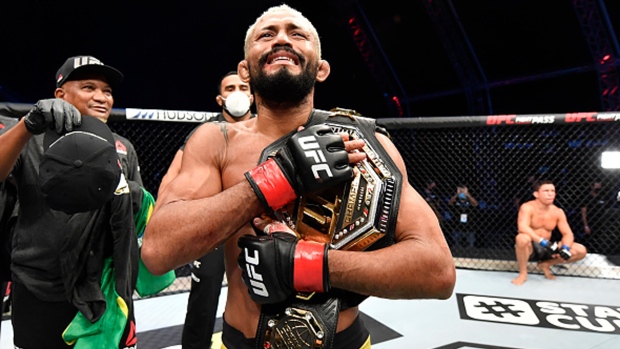 Both the Ultimate Fighting Championship's men's and women's flyweight titles will be on the line at UFC 255, Dana White announced on Friday.

The Nov. 21 card will be headlined by a double main event that sees Deiveson Figueiredo defend his title against Cody Garbrandt, while Valentina Shevchenko defends against Jennifer Maia.

Breaking: It will be flyweight title night at UFC 255 on Nov. 21, per Dana White (@danawhite).

Figueiredo (19-1, 8-1 in UFC) defeated Joseph Benevidez with a first-round rear-naked choke to win the vacant title at a UFC Fight Night last month in Abu Dhabi.

For Garbrandt (12-3, 6-3), this is an opportunity to regain gold and become only the eighth UFC fighter to win titles in multiple weight classes. A former bantamweight champion, Garbrandt will be making his flyweight debut in this fight. Last time out, the 29-year-old Urichsville, OH native defeated Rafael Assuncao by a spectacular second-round knockout at UFC 250 in June.

Maia, 31, earned her title shot after a first-round submission (arm-bar) win over Joanne Calderwood at last weekend's UFC Fight Night in Las Vegas. The bout will be the first title match for Maia (18-6-1, 3-2 in UFC).

This will be Shevchenko's fourth title defence since defeating Joanna Jedrzejczk for the vacant championship at UFC 231 in Dec. 2018. Shevchenko (19-3, 8-2 in UFC) last fought in February when she defeated Katlyn Chookagian by third-round TKO at UFC 247 in Houston.