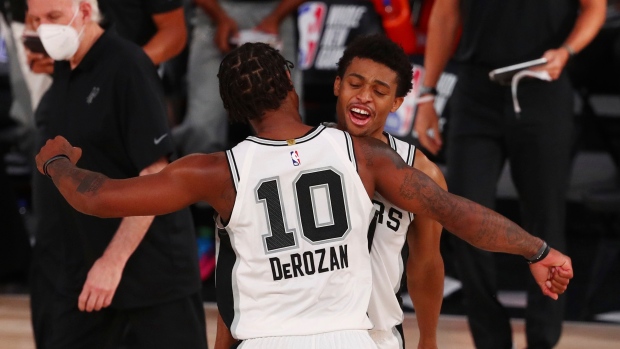 LAKE BUENA VISTA, Fla. — DeMar DeRozan scored 17 of his 27 points in the fourth quarter to help the San Antonio Spurs pull away and beat the Sacramento Kings 129-120 on Friday night.

“He understands the important parts of the game,” Spurs coach Gregg Popovich said. “He feels it.”

Before the game, Popovich and assistant Becky Hammon stood for the national anthem while the remainder of the coaches and players for both teams knelt. Popovich talked at length after the game about the importance of keeping the focus on racial injustice and inequality, but did not explain why he chose not to kneel.

“Everybody has to make a personal decision,” he said. “The league's been great about that. Everybody has the freedom to react any way they want. Whatever reasons I have, I reacted the way I wanted to.”

Derrick White matched a career high with 26 points in San Antonio’s first game of the restart. The Spurs needed to find offence because LaMarcus Aldridge, the team’s No. 2 scorer, had shoulder surgery in April and will not play in the restart.

“He’s expanded his game,” Popovich said. “He’s one of our top defenders. Maybe even the top. He contests threes, he takes charges. He’s really developed into a fine player.”

“It's all out of a positive side of their hearts,” DeRozan said. “Same way we kneel. Don't away take nothing from those guys. Pop speaks up. When it comes to Becky, she's there on the front line fighting for equality.”

“We put a lot on him, but he shows in games like tonight what he’s capable of," Kings coach Luke Walton said.

Bogdan Bogdanovic added 24 for the Kings, who are trying to break a 13-year playoff drought.

The teams flipped positions in the standings, with the Spurs moving a half-game ahead of the Kings. Both are in the cluster chasing the Memphis Grizzlies for the No. 8 spot in the Western Conference.

The Kings led 65-64 at halftime behind 20 points from Fox. The Kings shot 57 per cent before the break. White scored 15 points in the first half.

"We knew he was coming, but we weren't able to stop him," Walton said.

Kings: Announced Friday that Harrison Barnes and his wife Brittany are donating more than $200,000 to nonprofits that were created by the families of victims of police brutality and gun violence. ... Were assessed a technical foul for delay of game in the third quarter.

White took five charges and has a chipped tooth to show for it.

DeRozan joked that White was complaining about the tooth after the game.

“I'm pretty sure he can buy some new teeth,” DeRozan said.

San Antonio's young players showed up. Keldon Johnson, a rookie wing player out of Kentucky, played a season-high 30 minutes and scored eight points. Guard Quinndary Weatherspoon, a rookie from Mississippi State, played in just his fourth NBA game. Both played most of the season with the Austin Toros, the team's G League affiliate.

Spurs guard Marco Belinelli left the game in the third quarter with a sprained ankle. Popovich did not have an update after the game.