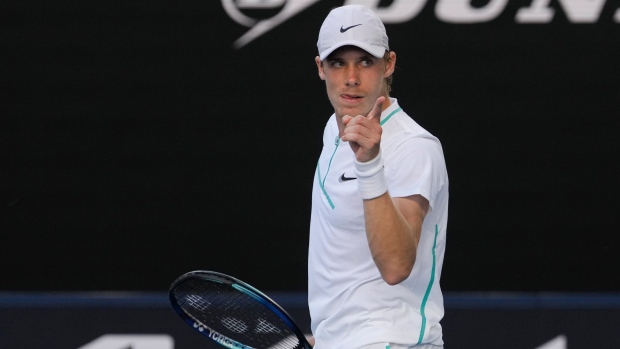 For the first time in his career, Denis Shapovalov has a spot in the fourth round at the Australian Open.

Standing at 6-foot-11, the No. 23 seed Opelka recorded 17 aces to Shapovalov’s 10 but it didn’t seem to bother the 22-year-old from Richmond Hill, Ont., who said he found a rhythm early on against the big-serving American.

"I was able to chip quite a lot back, so I was happy with that. I think I did a really good of just taking the chances today,” he said.

"Obviously it's really tough to get the rhythm against a guy like that so I'm super happy."

Shapovalov has averaged three hours and 37 minutes per match through his first three outings in Melbourne and said after the victory that he’s become more acquainted than usual with a post-match ice bath.

He’ll need everything he’s got against Zverev, who hasn’t dropped a set yet this week in his first three rounds.

Shapovalov owns a career record of 2-4 against the third-seeded Zverev and he only expects things to get harder from here on out.

“He’s tricky. Obviously he’s got a great serve. He’s all around probably one of the best players in the world right now but the last two matches I won against him I was able to just stay aggressive, expose him a little bit to make him feel pressure a lot of times in the match and hopefully I can do the same,” Shapovalov told TSN’s Mark Roe.

It’s been quite the start to 2022 for Shapovalov and that isn’t just because of his run at the year’s first major. Shapovalov won the ATP Cup alongside Canadian teammates Felix Auger-Aliassime, Brayden Schnur and Steven Diez earlier this month in Sydney.

Diez sat down with TSN’s Mark Masters on Friday to discuss the win and shed some light on Shapovalov’s upcoming test against one of world’s best.

“They’ve played a few times before and Denis has beat him. I remember 2020, the ATP Cup match they played in Brisbane. It was a great match, Denis won that match and I think he has the game to hurt him, to beat him,” Diez told Masters.

“Obviously Sascha can win, it’s a Grand Slam. It’s best out of five sets. He’s probably more confident in the further rounds in a Grand Slam than Denis but sooner or later Denis will get there for sure.”

Meanwhile, Montreal’s Auger-Aliassime dispatched of No. 24 seed Daniel Evans late Friday night to set up a fourth-round match of his own for the second straight year. It’s also the fourth Grand Slam out of the last five he has reached the second week of a major.

Auger-Aliassime will take on No. 27 seed Marin Cilic for a spot in the quarterfinals, who took down No. 5 Andrey Rublev Saturday night.