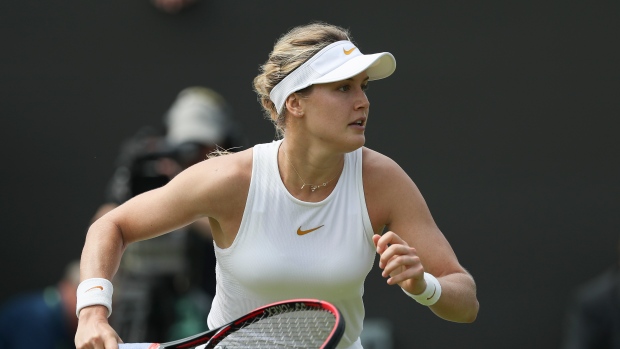 WIMBLEDON, England — Two of the biggest names in Canadian tennis remain locked in slumps after being bounced in the first round of Wimbledon on Tuesday.

Denis Shapovalov of Richmond Hill, Ont., and Eugenie Bouchard of Westmount, Que., lost back-to-back matches on Court 14, part of an 0-3 day for Canadian players at the third Grand Slam of the season.

Shapovalov, who is 2-9 since a run to the Miami Open semifinals in March, said he has to work on his mental game..

"I'm feeling amazing in practice. So it's all mental right now," Shapovalov said. "It's all coming from inside me. And unfortunately it's not something anyone can fix but myself."

The 27th-ranked Shapovalov became the youngest player to break into the top 30 since 2005 but insisted he's not putting too much pressure on himself to climb even further.

"But something subconsciously is happening for sure, and it shows in the matches," he said. "I'll talk to (my team) a little bit, and maybe a psychologist. Maybe someone that's been there in the past, felt these same things, just someone I can talk to and open up. I think it can definitely help."

Shapovalov didn't capitalize on any of his five break-point opportunities.

Bouchard, now ranked 79th in the world after reaching No. 5 following her run to the Wimbledon final in 2014, hasn't won a match since February. She has played just six matches since her most recent win as the 25-year-old native of Westmount, Que., has battled injuries.

Against the 61st-ranked Zidansek, Bouchard battled back from a 3-0 deficit (two breaks down) in the second set to force a third and final set. The Canadian also rallied from 3-0 down in the third set to tie it at 4-4, but couldn't complete the comeback in a match that lasted two hours 20 minutes.

Both players were inconsistent. Bouchard had 45 unforced errors and 19 winners, while Zidansek was at 42 and 32 in the same categories.

The players combined for more breaks (19) than service-game wins (16).

Bouchard was the lone Canadian in the women's draw after world No. 25 Bianca Andreescu of Mississauga, Ont., dropped out because of a shoulder injury.

The 112th-ranked Schnur, 23, got into the main draw as a lucky loser after dropping his final qualifying match.

The 135th-ranked Baghdatis, 34, is set to retire after Wimbledon. Baghdatis, who received a wild-card entry into the tournament, is a former top-10 player.

Baghdatis had the big edge in first-serve points, winning 82 per cent of his as compared to 62 per cent for Schnur.

The Canadian made 35 unforced errors, 15 more than Baghdatis.

No. 15 seed Milos Raonic of Thornhill, Ont., and No. 19 seed Felix Auger-Aliassime of Montreal — the two remaining Canadians in singles draws — will play second-round matches on Wednesday.

— with files from The Associated Press