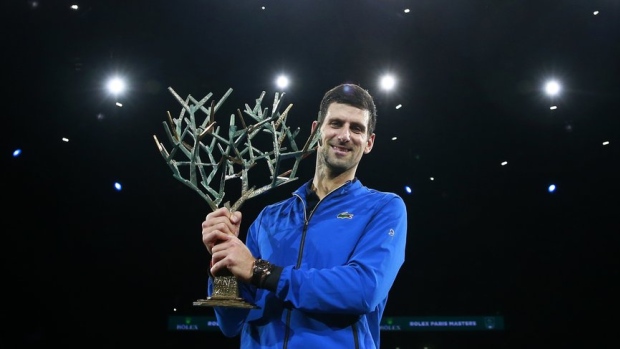 PARIS — Denis Shapovalov was excited to step on the court for his first appearance in a Masters 1000 final.

Then Novak Djokovic's serve quickly got in his way.

The Canadian was beaten 6-3, 6-4 by the top-ranked Djokovic on Sunday in the final of the Paris Masters.

"He just places (his serve) well. It's tough to read," Shapovalov said of his opponent's most effective weapon against him Sunday. "He changes it up, has a good variety. He was really picking his spots today.

"So I had maybe one chance, but it was tough. I mean, he played solid."

Shapovalov fired 11 aces to Djokovic's two and won 83 per cent of his first-service points, but the 20-year-old also double-faulted three times and had problems returning all match.

Djokovic saved the only break point he faced over the course of the match, which lasted just one hour eight minutes, and converted on two of four break points.

He served out the match with a love hold, hitting a forehand winner before turning to look at his box and raising his arms in triumph.

"Honestly, it was tough for me to kind of find a groove just because he was really, really picking his spots on the serve," Shapovalov said.

"It was my best serving performance of the tournament," he said. "Denis maybe lost his focus a bit."

The loss capped a solid week for the player from Richmond Hill, Ont., who will rise to a career-high No. 15 when the new rankings are released Monday. His previous career high was No. 20, and he came into the Paris Masters at No. 28.

Shapovalov defeated higher-ranked opponents in three straight matches to reach the semifinals of the tournament, including an upset over No. 6 Alexander Zverev in the round of 16. He advanced to Sunday's final when second-seeded Rafael Nadal withdrew with an abdominal strain before their match on Saturday.

Djokovic, who won his fifth title at the Paris Masters, improved to 4-0 against Shapovalov. All four of those wins have come this season.

The 16-time Grand Slam champion offered up praise for Shapovalov during his on-court interview after the match.

"The best things are yet to come for you," Djokovic said, switching from French to English so Shapovalov could understand him.

Shapovalov entered the match with only one career title — a modest ATP 250-level tournament in Stockholm last month — and the big-serving left hander looked tense, making three unforced errors in his first service game and slipping quickly to 3-0 down against a composed Djokovic playing in his 50th Masters final and 111th overall.

After botching a return on Djokovic's opening serve of the seventh game he whacked his racket into the ground in frustration.

"Yeah, a little bit of a bad start but, no, I don't think it was any nerves," Shapovalov said. "I mean, I just think it was just a bit of a slow start, couple misses here and there."

Dropping only four points on his serve in the first set, Djokovic clinched it with another dominant serving game which included two aces and concluded with a volleyed forehand winner at the net.

Shapovalov was up against it right from the start of the second set, saving a break point with an ace. Unforced errors resurfaced in the seventh game and Djokovic ruthlessly punished him with a break for a 4-3 lead.

Djokovic saved his first break point of the match at 30-40 in the next game when Shapovalov returned a sliced serve well wide.

Sunday's victory gave Djokovic his 77th career ATP title, tying John McEnroe for fifth all-time. It was also his 34th Masters 1000 titles, one back of Nadal.

Shapovalov said it was "great to hear" Djokovic compliment him during the trophy presentation, but acknowledged he has work to do to improve his game.

"It's an unbelievable week for me, but it doesn't stop here," he said. "It's back to the court, back to practising.

"And I want to be beating guys like Novak so I have to improve, get better, find a way to return better against his serve. And hopefully I can do even better next year."

This report by The Canadian Press was first published Nov. 3, 2019.