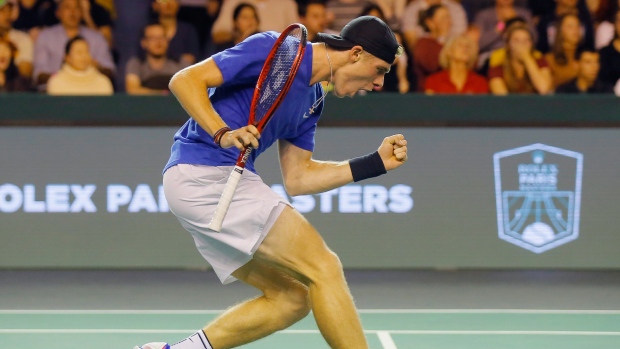 Fresh off winning his first ATP title in October, Denis Shapovalov is rolling once again at the Paris Masters.

The 20-year-old will face Gael Monfils in the quarter-finals on Friday after posting back-to-back upset wins.

Shapovalov continued his impressive run at the tournament with a three-set victory over sixth-ranked Alexander Zverev on Thursday. The Canadian defeated Zverev 6-2, 5-7, 6-2 just over 24 hours after a comeback 3-6, 6-3, 6-3 win over No. 11 seed Fabio Fognini.

The win over Zverev boosted Shapovalov’s career record against top-10 players to 3-13 and marked his first win over the German in four meetings.

“Yeah definitely (happy)," Shapovalov said after the match. "I've never beat (Zverev) before so it's an amazing feeling.

"The quality of tennis was unbelievable today so I was really happy with the way I was able to play."

Shapovalov, who started the tournament with a win when Gilles Simon retired in the first set of their Round of 16 match, saved 11 of 13 break points, but lamented his inability to close out Zverev in the second set.

“I felt like I was the better player in the second set, I felt like I had a little bit more chances than he did," Shapovalov said. "I told myself, 'Just regroup, try to get a good start (in the third set),' and that's exactly what happened and after that I just kinda rolled with it."

Monfils, currently ranked No. 13, defeated Radu Albot in 4-6, 6-4, 6-1 on Thursday.  He had a first-round bye before topping with France native Benoit Paire in the Round of 32 on Wednesday.

The 33-year-old has a 35-17 record this season, picking up the eighth title of his career earlier this year in Rotterdam.

Monfils eliminated Shapovalov from the US Open in a five-set thriller earlier this year in the first-ever meeting between the two. The Round of 32 match went to a tiebreak in three of the first four sets before Monfils took the final set 6-3.

Shapovalov will look to play a cleaner game this time around against Monfils after committing 11 double faults and 64 unforced errors in the August loss.

Boosted by his title in Stockholm, Shapovalov enters the quarter-final match ranked 28th and has a 12-4 record since falling to Monfils in New York.

The winner of their Friday’s match will advance to face either world No. 2 Rafael Nadal or Jo-Wilfried Tsonga in the semifinals on Saturday.