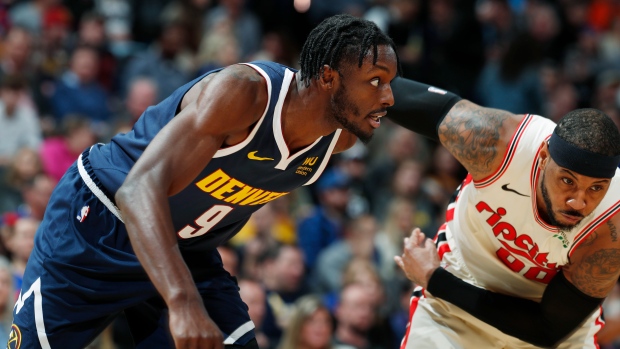 DENVER — With his team well ahead in the final seconds, Nikola Jokic heaved a shot from the top of the key that swished through the net for a 3-pointer.

It was that kind of night for the Denver Nuggets.

Jokic and Jerami Grant scored 20 points apiece and Denver overcame a career-high 33 by Hassan Whiteside to beat the Portland Trail Blazers 114-99 on Thursday.

Gary Harris and Will Barton each added 15 points for the Nuggets, who had lost five of their previous six games and failed to surpass 100 points in four of those losses — with poor outside shooting a big factor.

They were back on target against Portland, making twice as many 3-pointers (18 of 36) as the Trail Blazers (9 of 30). Grant accounted for five of them.

"The main thing is we were making shots and when we make shots, I think we can beat anybody," Jokic said. "When we're scoring, we create open 3s and those are the best 3s."

"And I liked the fact that guys were stepping into their shot, shooting with confidence, being a lot more shot ready and playing in attack mode," Malone said.

Carmelo Anthony, who spent the first 7 1/2 years of his career in Denver, received a warm reception from the crowd during pregame introductions. He had 20 points for Portland, and CJ McCollum added 15.

Trailing by seven at halftime, Portland cut the deficit to one on Damian Lillard's 3-pointer late in the third quarter. But the Nuggets scored 10 straight points in the last 2:33 of the period, including two 3s by Grant, to rebuild their lead to 89-78 going into the fourth.

Barton's 3-pointer with 9:43 remaining put the Nuggets up 96-80, their biggest lead to that point, and Denver maintained a double-digit advantage the rest of the way.

"They made 18 3s the first time we played them (in a preseason game) and they made 18 3s tonight. To me, that was the difference in the game," Trail Blazers coach Terry Stotts said. "Some of it was on us leaving shooters and not contesting as much, and some of it was on them because they moved the ball really well and found the open man."

The final margin was a departure from recent meetings. The previous seven regular-season encounters between the Nuggets and Trail Blazers had all been decided by single digits.

Denver, which lost to Portland in the Western Conference semifinals last season, has won the first two matchups this season, including an opening-night victory at Portland that snapped its 18-game winning streak in home openers.

Harris hit three 3-pointers in the first half, helping the Nuggets take a 62-53 lead.

During an early stretch, second-year Nuggets forward Michael Porter Jr. found himself defending Anthony, one of his childhood basketball inspirations.

"It was crazy," Porter said. "When I first checked in, he was like, 'What's up young fella?' That was definitely cool for me. He was one of my favourite players growing up."

Trail Blazers: C Jusuf Nurkic, working his way back from a broken left leg suffered last March, ran the stands at the Pepsi Center during the team's shootaround. Nurkic has been doing conditioning and shooting drills in recent weeks. The team hasn't given a timeline for his return, but Stotts said before the game, "He is doing everything he is supposed to do behind the scenes."

Nuggets: Jamal Murray was back on the floor after leaving Tuesday night's game at Philadelphia in the opening minutes with what the team described as a “trunk contusion” following an on-court collision. Murray finished with 12 points.