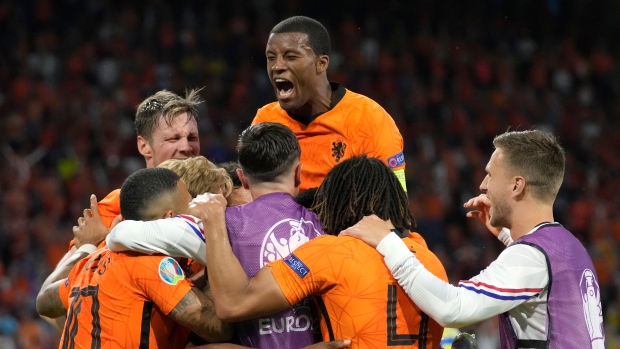 Denzel Dumfries had the final word for the Netherlands as they earned a 3-2 victory over Ukraine in their EURO 2020 opener that required them to survive a late second half surge from their opponents.

After the teams played an entertaining, but scoreless opening 45 minutes, Georginio Wijnaldum and Wout Weghorst scored six minutes apart in the 52nd and 58th minutes to stake Netherlands to a two-goal advantage.

Just as it seemed that the three points were about to be salted away for the Dutch side, Andriy Yarmolenko curled one into the top corner of the net over keeper Maarten Stekelenburg in the 75th minute to get the visitors on the board and give them a way back into the game.

Roman Yaremchuk would complete the comeback four minutes later heading in a cross to equalize for Ukraine.

Dumfries would fire home a header of his own in the 85th minute off a pass from Nathan Aké that would prove to be the winner for the Netherlands, playing in front of their home fans in Amsterdam's Johan Cruijff Arena.

“I am relieved,” Wijnaldum said following the win. “Overall, we played a good game, but we gave them two chances in 10 minutes which were two goals. We need to learn that if we play such a match we need to finish it off well.  We let them get back into the game and that needs to improve.”

Meanwhile, Yarmolenko believes his side can show the same kind of fight in the rest of their group games.

"It was a difficult game," said Yarmolenko. "We realized that we were playing against a serious rival.  The coaching team are happy with how much we gave. It is always upsetting to lose a game, but we have two more games to go and we will still play with the same energy."

With the victory, Netherlands joins Austria in first place in Group C, while Ukraine and North Macedonia are at the bottom of the group on zero points.