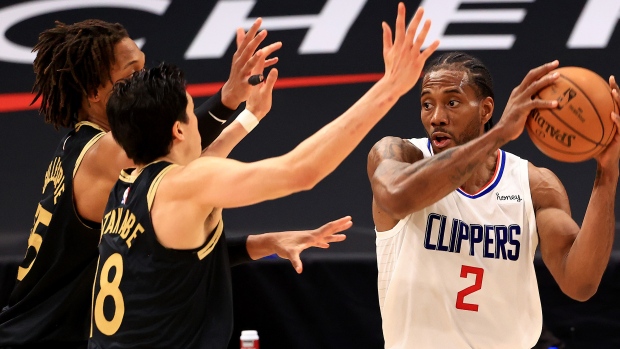 TAMPA, Fla. — Toronto Raptors coach Nick Nurse hopes his players keep the frustration of this bizarre NBA season front of mind when they head into the off-season.

They can lump Tuesday's 115-96 loss to the Los Angeles Clippers into that.

Chris Boucher had 16 points and seven rebounds in his first game since missing nine with a sprained knee. Khem Birch added 13 points for the depleted Raptors (27-42), while Malachi Flynn had 11. Freddie Gillespie, DeAndre' Bembry and Jalen Harris chipped in with 10 points apiece.

The game came a night after the Raptors were officially eliminated from post-season contention, just two years removed from their thrilling run to the Larry O'Brien Trophy.

"Hopefully it'll sting a little bit this summer," Nurse said. "We'll feel that sting in the summer workouts, things like that to get ourselves back to where we're used to being."

Former Raptors star Kawhi Leonard and Terance Mann had 20 points apiece for the Clippers (46-23), who are still manoeuvring for post-season conference seeding.

With an eye on evaluation and development, Nurse sent out a franchise-record 35th different starting lineup of the season for the game. Just nine players dressed. Veterans Kyle Lowry, Fred VanVleet, Pascal Siakam and OG Anunoby were among the ones who didn't.

"It's really valuable time here, it's not just get it over with here in these games. It's a week of valuable time that we've got to be looking towards the future," Nurse said.

The young Raptors were no match for a Clippers squad that built a 17-point lead in the second quarter, and had stretched it to 18 by midway through the third.

The Raptors will miss the playoffs for the first time since 2013, a post-season streak that started with the entertaining series against Brooklyn that saw the launch of Jurassic Park and "We The North."

"It's certainly not easy to get a seven-year run," Nurse said before the game. "I think first of all the organization, and all of us, should be proud of that.

"And then on the other hand, it's disappointing. I thought we played about as well as we could last year and with a break or two could have kept on rolling who knows how far a year ago. And to kinda come back and be where we are today, it's very disappointing, and it's a little sad, to be honest, to have that run. It was a hell of a run."

The Raptors were coming off five consecutive 50-win seasons, and won nine playoff series since 2013, the most by any Canadian major pro team (NHL, MLB, MLS). Toronto FC is second with four.

In a season that Nurse has said didn't have road blocks, it had cement walls, the displaced Raptors tumbled down the Eastern Conference standings during a COVID-19 outbreak in March. Numerous players including Lowry and VanVleet, who comically badgered the officials from the bench on Tuesday night, missed multiple games to injuries down the stretch.

Boucher sounded like he's ready to leave Tampa. Asked if he had any good memories of the Florida city, he said "Maybe when I leave. When I go back to Toronto I’ll be good. Honest, I miss Toronto, like the food and everything. It's been rough.

"They did everything for us, the set up and everything was great -- but it ain't Toronto."

Birch, who's been excellent since he signed with the Raptors on April 10, said he'll take the development from these games into the off-season.

Birch said remaining healthy will be key to whether or not he plays for Nurse's Canadian team in Olympic qualifying in late-June in Victoria.

"If I miraculously get hurt or something then I probably won’t (play), but if I'm healthy by the end of the year then I'm gonna play," he said.

Birch created a social media buzz when he arrived at Amalie Arena on Tuesday in an FC Montreal jersey.

"It's funny because I forgot about all that (Montreal vs. Toronto rivalry) stuff, I was just trying to rep my city because it’s probably the last game that I’ll dress up so I decided to wear this jersey," said Birch, a Montreal native.

Leonard -- whose historic four-bounce buzzer-beater against Philadelphia in the 2019 conference semifinals was two years ago Wednesday -- led the way with nine points in the first quarter and the Clippers led 27-19 to start the second.

Marcus Morris's three-pointer late in the second quarter made it a 17-point difference, but the Raptors closed the half with a 13-4 run and headed into halftime trailing 60-52.

Paul George had nine points for L.A. in the third, and the Clippers led 85-71 with one quarter to play.

Nurse had kind words for the Congolese big man before the game.

"I really enjoyed him . . . I certainly was (disappointed he left). I think our team was. I think our organization was," Nurse said.

The Raptors are in Chicago on Thursday and Dallas on Friday, then host Indiana in their season finale on Sunday.

This report by The Canadian Press was first published May 11, 2021.