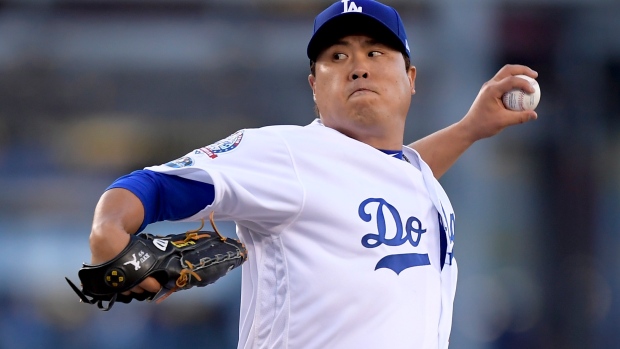 SAN DIEGO — The Toronto Blue Jays exited the winter meetings with a better rotation than when they arrived, but the Hyun-Jin Ryu chase is the one that matters.

Inking 33-year-old righty Tanner Roark to a two-year deal, one that could be officially announced Monday after he passes a physical, adds a durable innings-eater to a rotation mix that is at this point completely devoid of the impact arms needed to turn three seasons of sub-.500 records around.

Ryu, even though he’ll be 33 in March, is an impact arm, and it’s inarguable.

A second-place finish in National League Cy Young voting last month confirms that, as does the career 2.98 ERA he’s spun over six seasons and 740.1 innings.

But there’s a catch.

Ryu is an impact arm…when he’s available to pitch.

His resume is littered with health issues, surgeries, and stints on the injured list — Ryu has landed on the IL nine different times in six years with shoulder (twice), hip (twice), groin (twice), elbow, foot and neck injuries — making the push for the Korean southpaw one that comes with a large element of risk.

That’s not to say it’s wrong. The exact opposite, in fact.

With a four-year sample size to look back on, the Mark Shapiro/Ross Atkins regime has been the definition of risk-adverse, rarely going outside the box to creatively move assets around and preferring to chase depth and floor rather than upside.

Some of that stemmed from how the roster was constructed with bad contracts and an aging group that took time to disassemble, but nothing ever seems to prevent teams like the Oakland A’s and Tampa Bay Rays from looking for creative ways to improve, no matter the contention window.

But now is the time for the Jays to take risks and seek out impact, even if there’s a chance it could blow up in their faces.

A Ryu signing would be risky, without a doubt.

Since arriving in the majors in 2013, Ryu has thrown more than 150 innings just three times.

From 2015 through 2018, he was able to pitch just 213.2 innings, taking the ball for only 40 starts, before throwing 182.2 innings this season with contract-year motivation on his mind.

Ryu was simply brilliant in his age-32 campaign, posting a 2.32 ERA and winning 14 of his 29 starts, all of it backed by an elite strikeout-to-walk ratio. It has left him in great position to cash in behind Gerrit Cole, Stephen Strasburg, Zack Wheeler and Madison Bumgarner on the starting pitching market.

While there’s no debating the Jays’ interest in Ryu, you could vigorously debate how realistic it is at this point, especially with Cole and Strasburg deciding to leave the Dodgers and Angels out in the cold, and those deep-pocketed clubs now seeking alternatives to their rotation problems.

Ryu returning to the Dodgers seems like an obvious fit, but the Angels didn’t invest $245 million in third baseman Anthony Rendon to get beat 10-9 every single day next summer, so more resources will be spent by owner Arte Moreno in the coming days and weeks.

You can bet on that.

At the outset of the off-season, MLB Trade Rumors projected a three-year, $54-million contract for Ryu, but the market has shifted upwards and $20 million per season should be the floor now.

Despite the pessimism surrounding Atkins and the Blue Jays, there have been a handful of positive signs this winter that they’re inching towards taking more risk and spending more money, but no one remembers the bridesmaids and another chase falling short will quickly erase any optimism.

We always have to remember that it’s the player’s decision in the end, but if Ryu is the guy they truly want and the front office really believes the lefty can stay healthy, go get him.

No one wants to hear about how “close” or “involved” you were.​