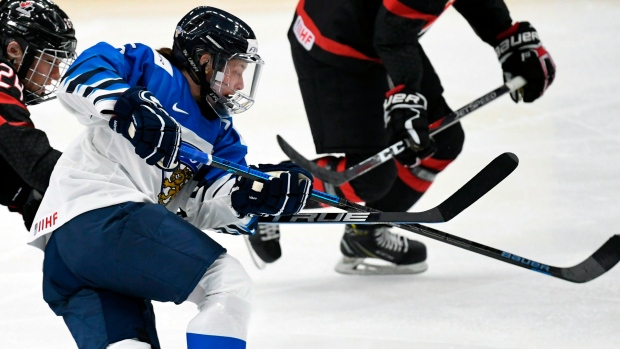 When Finland’s women’s hockey team hits the ice in Calgary for this month’s IIHF Women’s World Championship, they’ll do so for the first time as the reigning silver medallists.

The Finns are coming off their best-ever result at a world championship, finishing as runners-up after losing to the American in the gold-medal game in 2019. Now, the third-ranked team in the world believes they can challenge for gold.

“We have always believed that when we work hard, we can reach that level where the U.S. and Canada are,” captain Jenni Hiirikoski told TSN.

The Finnish team kicks off the tournament on Aug. 20 against Canada, which can be seen live on TSN. At the 2019 women’s worlds, the Finns upset the Canadians in the semifinal by a score of 4-2.

If the Finnish are to shock the Americans or Canadians this time around, they’ll need to do it without their star player from 2019, goaltender Noora Räty.

Räty, who made a combined 93 saves in Finland’s final two games against Canada and the United States in the 2019 world championship, told Finnish newspaper Ilta-Sanomat that she had to decline participation in this year’s tournament because of her work commitments.

Räty runs a goaltending school in Minnesota where she lives, and told the Finnish outlet that she couldn’t afford to take the time away.

Earlier this year, when the tournament was set to take place in Halifax and Truro, N.S., in May, Räty told TSN that she was unlikely to participate due to border and travel restrictions that would have affected her. The tournament was cancelled by the Nova Scotia government on April 21 due to the ongoing COVID-19 pandemic but later rescheduled for Calgary.

“We were in that situation earlier in the spring,” Hiirikoski said about the team missing Räty. “Obviously Räty has always been the big factor for us. But now it's time for new girls to step up.”

“It's not my most wanted question to talk about myself,” said Hiirikoski. “It’s obviously an honour to hear those kind of things about you. I think in these tournaments, in women's worlds, there is a lot of really good defenders so it's nice to be on that list.”

Eight players on Finland’s roster will be making their world championship debuts. Goaltenders Anni Keisala and Meeri Räisänen haven’t played at a women’s worlds since 2016, although Keisala was on the roster in 2017, and Räisänen was named to the 2018 Olympic team but did not play.

“We have a couple rookies, so it will be a different team, said Hiirikoski. “When we put the lion jersey on, we're ready to fight for the medals.”

One advantage that Finland may have over Canada and the United States is meaningful game action. North American players have had limited ice time since last year due to COVID restrictions affecting the PWHPA and international competitions.

But Finland’s Naisten Liiga was the first women’s hockey league in Europe to return to play, starting its 2020-21 season last September. Hiirikoski captains Luleå HF in the Sweden’s Women’s Hockey League, and she led her team to both the regular season and playoff championship.

“It’s hard to say if it will give any advantage for us, but obviously it has been really good for our girls that we have had the chance to play the whole season,” said Hiirikoski.

Fifteen players were part of the team that shocked everyone at the 2019 world championship. With the tournament taking place in Espoo, Finland, the hosts had the crowd on their side as they prepared for their semifinal showdown against Canada, a team that had beaten them 6-1 during the preliminary round.

Canada jumped out to 1-0 lead just over two minutes into the game, but this time, Finland fought back to tie things up before the end of the period. Hiirikoski gave her team the lead on the power play in the second period, and although the Canadians would draw level again, Susanna Tapani notched another for Finland to put them ahead, 3-2.

"You have the thought process, ‘Jeez, are we gonna be able to do it? Or are they, again, gonna come back and score the couple goals that they usually do?’” Räty told TSN in March.

But there was no comeback from Canada, thanks in large part to Räty’s 43-save performance. Finland added an empty netter to seal the biggest win in the team’s history.

After the whistle blew, Hiirikoski remembers being in almost a state of shock.

“I remember that I said, ‘Oh my God, what happened?’” she said. “We were just so focused on what was going on on the ice, so it was kind of a huge moment.”

Finland would go on to face the United States, which had won four straight world championship gold medals, in the final.

“We didn't have anything to lose,” said Hiirikoski. “We knew that we have all of Finland behind us and the home crowd and they came there to cheer for us. We just wanted to give everything that we still had.”

“It was surreal. I grew up five minutes from that rink and it was sold out,” said Räty.

The championship game was deadlocked through 60 minutes by a score of 1-1. On paper, it looked like a tightly fought match, but the Americans dominated much of the play, outshooting the Finns 37-18 after three periods. Räty once again stood tall for her country against a heavily favoured opponent.

“We knew that the fact that we were even in overtime – all the pressure is on USA,” Räty said. “We could just go out there and have fun. Of course we wanted to win. You want to win that game; you want to bring home the gold. But again, I felt like we could play a lot more relaxed than USA.”

“We had a good mindset and we knew that it's only one goal,” Hiirikoski said about her team preparing for overtime. “One goal will give our dream result.”

Just over 10 minutes into OT, it looked like that dream result came true.

Hiirikoski made a rush up the ice and took a shot on American goalie Alex Rigsby, who couldn’t control the rebound. Rigsby ended up sliding out of her crease as Hiirikoski skated by, and Petra Nieminen potted the puck in the open net.

She immediately threw off her gloves and helmet as her teammates surrounded her to celebrate what appeared to be Finland’s first-ever gold medal.

But as the Finnish players rejoiced, Räty noticed that something was wrong.

“I see [American captain] Kendall Coyne [Schofield] hop on the ice and go to the ref. So it's like, ‘Girls, girls! No, they're going to video [review], we can't celebrate yet. They're reviewing it,’” she said.

“I think it took a couple minutes to realize that the Team U.S. captain was talking with the referees still,” said Hiirikoski. “So then I knew that, okay, something is going on. So I just wanted to go and ask, ‘Is there something that we need to know?’”

The IIHF video judge reviewed the goal for apparent goaltender interference. Hiirikoski did make contact with Rigsby, but the goalie was already out of her crease from her own momentum while trying to make the initial save.

The Finnish players waited anxiously for more than 10 minutes while the play was being reviewed.

“It just takes forever. That 12 minutes felt like two hours because we're about to do something special. We're about to make history,” said Räty. “So you’re just waiting and waiting and you really have no clue which way it's going to go.”

After the length delay, the referee stepped out of the box and signalled no goal. The IIHF later released a statement saying that the judge disallowed the goal due to “non-incidental goaltender interference.”

An attacking skater who makes contact other than incidental with a goaltender who is out of his goal crease during game action will be assessed a minor penalty for interference. If a goal is scored at this time, it will not count.

Incidental contact is allowed when the goaltender is in the act of playing the puck outside his goal crease, provided the attacking skater makes a reasonable effort to minimize or avoid such contact.

The IIHF stated that both of these rules were taken into consideration for the goal judge’s decision.

Adding to the confusion: the referee then assessed Rigsby a two-minute penalty for tripping Hiirikoski (on-ice penalties are not reviewable).

“As much as you want to think about it, you can’t change it,” said Räty. “So just deal with it and then control what you can control. I just don’t want to spend my energy on speculating on what happened or what didn't happen.”

Finland would go on to lose to the U.S. in a shootout, and while the players take immense pride in their silver medal, there still remains some mixed feelings over the result.

“I probably would have rather lost like 6-0 than the way that we lost,” said Räty. “Personally, I don't like that you decide such a big game in a shootout… If you go out and you lose 6-0, you say, ‘Okay, the better team won.’ But I'm not sure if the better team won this time.

Support for the Finnish women poured in from around the world, including on social media from former players like Canadian great Hayley Wickenheiser. The Finnish Ice Hockey Association later announced that it would pay the Finnish team the bonus allotted for winning a gold medal.

“I think everyone was really proud of the team, especially how we played,” said Hiirikoski. “That's the biggest thing that I'm proud of – that we played really good hockey and we gave everything and we were ready to fight when it mattered.”

“I feel like it was really cool to see how the whole Finland and the whole hockey world came together to support our team,” said Räty. “It’s not always been the case where women's hockey is being taken seriously in Finland. So I think we really made our mark in history and now people actually know us and know that we are a real deal.”