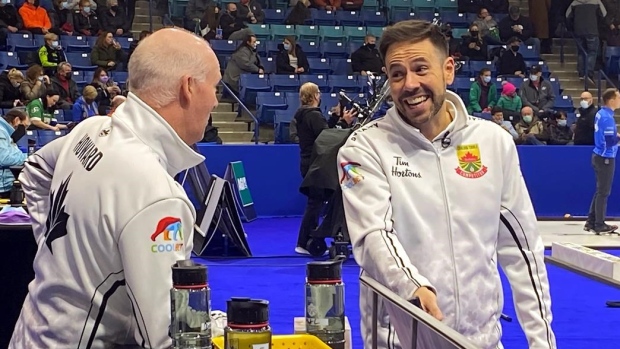 SASKATOON — Glenn Howard's Olympic dream seemed all but dashed after a loss in the recent pre-trials final.

A call-up from friend and longtime Ontario curling rival John Epping has given the veteran skip one last chance to get to Beijing's Winter Olympics in February.

One of the most decorated skips in the world, the 59-year-old Howard jumped at the opportunity to serve as a fifth for the Toronto-based team at Canada's Olympic trials.

"If I can help them out in any way, that's all I'm trying to do," Howard said. "Another set of eyes with a little bit of experience. That's what they're counting on."

The four-time national and world champion guided his regular team to a solid No. 12 position in the world rankings.

Howard's foursome from Penetanguishene, Ont. missed the cut for trials at a direct-entry qualifier in September in Ottawa.

That sent them into the last-chance pre-trials in Liverpool, N.S., where they lost to Tanner Horgan for the final men's berth in the nine-team field in Saskatoon.

Epping's team then reached out to Howard to see if he'd be interested in a part-alternate/part-coach role with regular coach Jim Wilson.

"He was at the top of our list," Epping said. "We just thought his experience and knowledge and everything he's done with the game and knows about the game would just be a huge asset to us."

A fifth typically handles behind-the-scenes duties and must be ready if a sub is needed on the ice.

Howard may not see any ice time at the SaskTel Centre over the next week, but the fact he's been on the elite curling scene for nearly four decades will certainly come in handy.

"He's a bit of everything right now. I see him as even a co-skip," Epping said. "Helping me a bit, managing the squad and managing the ice. He's busy this week. He's going to be exhausted by the end of the week.

"I know he's sitting on the bench but he has been instrumental so far, even just our prep coming here. We know if we're going to win this week, he's going to play a huge role in that."

Howard had a similar role at the 2021 national men's championship when injury kept him on the coach's bench.

He did make it to the 2018 Winter Olympics as a coach for Britain's Eve Muirhead, but missed the podium in Pyeongchang, South Korea.

"I didn't see this coming at all," Howard said. "It was really cool when the boys asked me. From a selfish perspective, it would be a way to get back to an Olympic Games and I would kill to get back because it was obviously so fun as a coach.

"Being a (regular) player would be the ultimate, but that's just not the case. We didn't win enough games and we didn't win the right game to get (to trials)."

"Any time you can hang around that guy, you're only going to learn," Laing said.

Howard and Laing, who spent about 10 years together as teammates, reached the final of the 2009 trials but lost to Kevin Martin. They won world titles in 2007 and 2012.

"He's a good buddy of mine," Howard said. "When we were teammates, we won an awful lot of games and a lot of big championships. That combination has worked pretty well in the past.

"So who knows, maybe being a part of this team, it might work out and we'll get our chance to go."

Howard takes a season-by-season approach to his regular team rather than the more common quadrennial focus. He would be a heavy longshot to make an eighth career trials appearance in 2025 at age 63.

Epping, who dropped his round-robin opener to Brad Jacobs, rebounded Sunday with a 10-5 victory over Jason Gunnlaugson.

"He has just proven himself to be an elite player," Howard said of Epping. "He put himself together with a really great team. I'm really proud to be a part of that."

This report by The Canadian Press was first published Nov. 21, 2021.