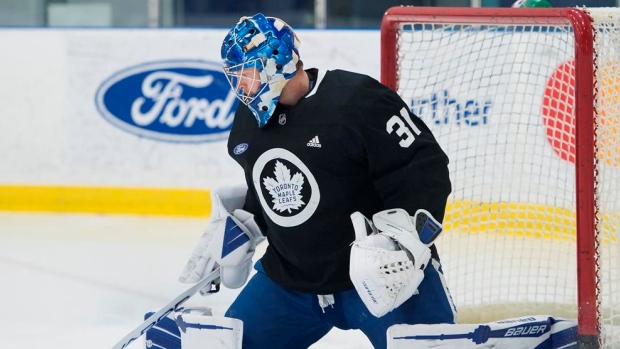 The Maple Leafs held a practice and scrimmage at the Ford Performance Centre on Saturday.

Frederik Andersen has a theory about how Toronto's top stars got so many odd-man rushes against him during Saturday's scrimmage.

"Something our team needs to adjust for a little bit is they're cherry picking," the Leafs goalie said with a smile. "I haven't seen Willie be in their end yet."

William Nylander scored two goals in leading Team Matthews past Team Andersen 6-2 in the second of five planned scrimmages at training camp. The series, which pits close friends Andersen and Auston Matthews against each other, is now even at a game apiece.

"It's a best-of-three now," Andersen said deadpan, "so we'll recover and reset here."

Andersen is facing a stiff test in the scrimmages as Team Matthews features Toronto's top two forward lines, which is a hard group to keep in check at the best of times. Matthews (on a breakaway) and John Tavares (on a two-on-one rush) both scored during Saturday's romp.

"All joking aside, they're some of better players in the league, some of the deadliest players when they get the puck in the scoring situation so that's a tough opponent," Andersen said. "It's good for me to be able to see a lot of shots from them."

Andersen posted the worst save percentage of his NHL career (.909) while starting 52 of Toronto's 70 regular season games. It’s imperative that the Leafs get the 30-year-old feeling good about his game during this training camp.

"He had a tough day in the scrimmage," head coach Sheldon Keefe acknowledged. "I think that his team has to do a better job in front of him. I thought he was the real stand out of the day yesterday ... he's just like everybody else, finding his way to get ready to play and I've got no doubts that he will be."

​"I've been feeling really good in practices," Andersen said. "The game situations, getting the timing of everything and reading plays, yeah, that's what's kind of missing and these games are good for that stuff."

Jack Campbell, acquired in a February trade with the Los Angeles Kings, has stabilized the back-up spot, but Keefe made it clear the Leafs will go as far as the six-foot-four Dane carries them. ​

"Frederik Andersen, from my perspective, was a big reason why that series against Boston went to seven games [last year with] the work that he did to be the backbone of the team at different times. We feel good about his ability to do that. So, when you have somebody who has done it for you and has that ability you're going to give them more of an opportunity, of course, and trust that they'll find their way ... Fred's our guy and we have to do all we can to have him prepared."

Andersen, who posted a .922 save percentage in the series against Boston last year, is using the early part of camp to experiment with some new equipment. The CN Tower pads from Bauer, which he wore before the pandemic pause, are gone.

"Just something I'm trying to work out so that's all I'll say about that," Andersen noted coyly. "I'm just trying to make sure I can be the best I can be."

How important is the feel of equipment to a goalie?

"It means everything," he said.

Zach Hyman took a Jason Spezza shot off his leg during special teams work on Friday and appeared to be in a great deal of discomfort. After chatting with the medical staff, he completed the on-ice work. But the winger missed Saturday's practice and scrimmage. Per NHL policy, Keefe could only say Hyman was "unfit" to take the ice.

In his absence, 18-year-old Nick Robertson got the chance to skate alongside Matthews and Nylander.

"Really didn't want to disrupt anything else too much," Keefe explained. "It was a good chance to give Nick a chance to be able to play with those guys and if it can help his confidence and his experience a little bit, I thought that would be a good thing. It wasn't about Nick, frankly, it was just more about making sure we had consistency throughout the rest of the lines that we wanted to maintain."

Nick Robertson with a shorthanded goal gives Team Matthews a 3-1 lead midway through the first period of #Leafs scrimmage pic.twitter.com/SwTSZlSChC

Robertson scored a shorthanded goal in the scrimmage and was a force on the forecheck, but afterwards Keefe did his best to slow the hype train.

"I know you guys want to make the story about Nick but that's not the story of the day for me," the coach said. "Every experience we can get for Nick is a positive one and if something breaks free and really starts to come together than that's a positive for both he and us, but we're just really focused on getting our team ready."

Keefe indicated there will likely be a different look on that line for Sunday's scrimmage.

Robertson, who scored 55 goals in 46 games with the Peterborough Petes, skated in Toronto’s reserve group in Friday’s practice.

During the season pause, Mitch Marner made an appearance on the Connor Carrick Podcast telling his former teammate that "the award that would be really cool to be acknowledged for is the Selke."

The 2019-20 nominees for the Selke Trophy, given to the league's top defensive forward, will be unveiled on Monday. Marner was asked how close he feels to being in the conversation.

"No idea," he said. "At the start of the season you just put goals in your mind to try and do, but at the same time when you're playing hockey you don't think about them too much."

"He tried really hard when he was a bit younger to really grow that area of his game and he's done an outstanding job," said defenceman Morgan Rielly. "He understands the importance of it and has worked really hard to improve it and it's obvious with how he plays in our end. He takes that very seriously."

As he looks to take another step in that department, Marner has been keeping a close eye on St. Louis Blues centre and reigning Selke winner Ryan O'Reilly.

"I got the chance to play with him at the Worlds and see how professional he is on the ice, at practice and everything like that," Marner said. "He doesn’t get as much love as he should. He's a guy that every single night plays his heart out. He plays every aspect of the game right. He plays power play, penalty kill, if you need a goal or need to stop a goal from going in, he's always on the ice to do any of those things. That's the guy I really enjoy watching."

Marner points out that centres are often viewed as the top defensive forwards so in the future he wants to put himself in a position to be trusted to take face-offs while continuing to fine tune his play around the net.

The 23-year-old is also determined to help the Leafs penalty kill get better. Toronto's unit was absolutely torched by the Boston Bruins in the last two playoffs.

"We got to talk more coming into our zone," said Marner, who is on Toronto's top PK unit alongside Hyman. "When get a chance to jump pucks we got to go at people fast, make people feel uncomfortable on the power play and when we do get those opportunities to get outs we got to be talking to each other and figuring the best way out. And also keeping the shifts short and keeping everyone fresh on the ice. The best penalty kill is when you're fresh and able to go 100 per cent the whole time."

During the regular season, Toronto's kill rate was 77.7 per cent, which ranked 21st in the NHL.