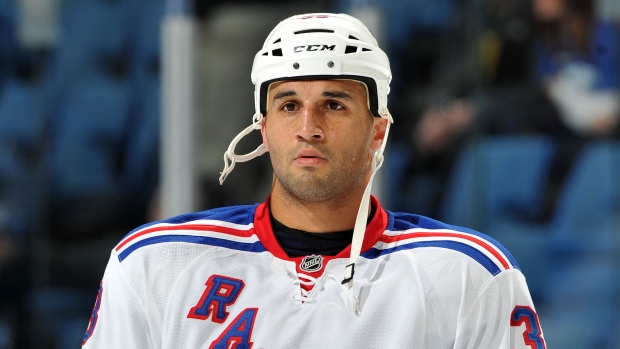 TORONTO - Former Toronto Maple Leafs enforcer Andre Deveaux has been exonerated by Swedish authorities for his attack on an opposing player earlier this year.

Prosecutors had considered charging Deveaux after he delivered a two-handed slash to the ankle of defenceman Per Helmersson during the pre-game warm-up of a Swedish professional hockey league game.

"I fully co-operated with authorities throughout this entire ordeal, despite the unfair process and inaccurate reporting by the Swedish media," Deveaux said in a statement Friday, referring to reports from Swedish media that incorrectly said a warrant had been put out for his arrest. "I am happy that the prosecutor made the right decision today."

Deveaux, who played for Rogle BK, told Canadian reporters in early May that he had been threatened by players on Helmersson's team, VIK Vasteras HC. He said he was simply protecting himself when he took the action he did.

"I was always confident that this investigation would go nowhere," said Deveaux. "It was unwarranted, particularly given the facts. I now look forward to Rogle BK living up to their obligations.

"My wife, Anya, and I are grateful for the outpouring of support we have received in Canada."

Helmersson had checked Deveaux into the boards from behind in the previous game between the two teams, resulting in Deveaux sustaining a concussion. No penalty was called on the play.

The Swedish Ice Hockey Association suspended Deveaux until Feb. 15, 2016, a decision he is appealing.

Deveaux has spent most of his career in the minors. In 31 NHL games for Toronto and the New York Rangers, he recorded zero goals, two assists and 104 penalty minutes. In just 20 games with Rogle, he collected 67 penalty minutes, along with six goals and three assists.