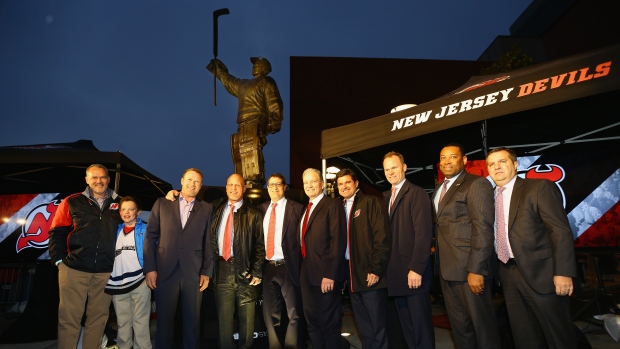 The 44-year-old Brodeur was honoured prior to the Devils' game against the Minnesota Wild on Saturday night in a ceremony attended by a couple hundred fans on a damp, drizzly night.

Brodeur led the Devils to three Stanley Cups and set NHL records for games played (1,266), wins (691) and shutouts (125). The 10-time All-Star won the Vezina Trophy four times during his 21 seasons with the Devils, and the Montreal native was a two-time Olympic gold medallist .

The Devils unveiled Brodeur's statue in February when they retired his No. 30 jersey.

"I feel really fortunate to be able to sit back and enjoy what I've done and being so successful," Brodeur said before the ceremony. "There's no regret in what I've accomplished in my career. When you retire and you don't play the game you kind of understand that you sometimes take things for granted because the day-to-day life with games and travel, you really don't stop to thank people and enjoy yourself as much as you should."

Fans at the dedication chanted "Marty's better!" — a frequent chorus when Brodeur made a big save, especially against Henrik Lundqvist and the rival New York Rangers.

The 11-foot bronze statue of the goaltender has a base that includes Brodeur's records, his autograph and the Devils' logo.

Brodeur is currently the St. Louis Blues assistant general manager. He briefly played for the Blues in the 2014-15 season before retiring.