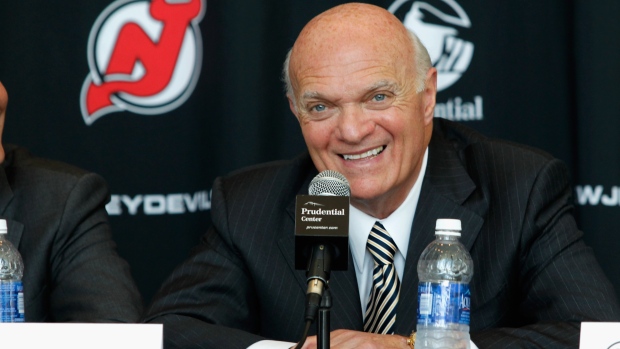 NEWARK, N.J. - The New Jersey Devils replaced the fired Pete DeBoer with a three-headed coaching staff and didn't fare any better in the first game of the unique experiment.

"I still see positives," Lamoriello said after his club's latest loss Saturday night. "We're taking this a game at a time. You have to be optimistic or you shouldn't be in this game. Winning breeds success, and success breeds winning."

There will be no official head coach for the rest of the season. Lamoriello plans to remain on the bench "until I feel comfortable with the situation."

DeBoer was fired Friday with the Devils languishing nine points out of the last playoff spot in the Eastern Conference. They are ahead of only Carolina.

"We're going to feed off each other," Oates said before the game. "There's no reason why we can't work together. Everything happened pretty quickly. But when Lou calls, the answer is always 'Yes.' It didn't matter what my responsibility would be."

Oates went 68-47-17 in two seasons with the Capitals and spent two years with the Devils as an assistant coach, helping them reach the Stanley Cup finals in 2012. He played 19 years in the NHL, including a stint with the St. Louis Blues, when he was teammates with Stevens. Oates had 341 goals and 1,079 assists in his career and was inducted into the Hall of Fame in 2012.

"We have tremendous respect for each other," Oates said. "We worked together here. We both played here and coached here, so it's an easy transition for us. It's kind of a collaboration right now. It's a team effort and we're all on the same page."

Stevens spent 13 seasons with the Devils, much of it as captain. He had 196 goals and 712 assists during his career, leading the Devils to Stanley Cup championships in 1995, 2000 and 2003. He was an assistant coach with the team until the start of this season, when he had philosophical differences with DeBoer.

"It's never easy in this league," Lamoriello said. "It's been a long 48 hours, but you have to do what you feel is right."

Lamoriello said that it wasn't fair to ask another coach to take over a floundering team midway through a season.

"That's why we didn't even consider anyone else," Lamoriello said.

"Both of these individuals know our players, know the philosophy that we want," he added. "It makes sense. I know it's unique and different, but right now, it's our way of moving forward. I'm totally confident with the setup."