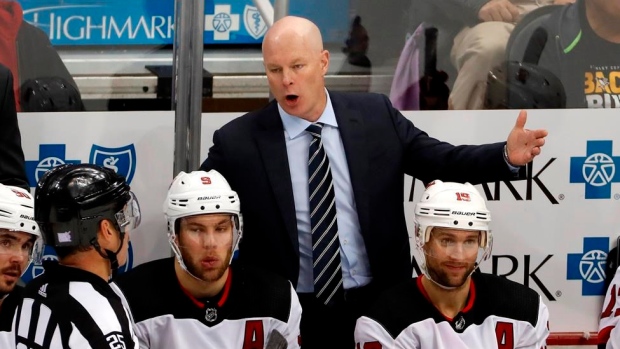 The New Jersey Devils and Minnesota Wild are both off to slow starts this season, but according to TSN Hockey Insiders Bob McKenzie and Pierre LeBrun, neither team is considering a coaching change right now.

New Jersey did. however, make a change to their coaching staff on Wednesday, announcing that assistant general manager Tom Fitzgerald will join head coach John Hynes' staff and serve as an assistant coach effective immediately.

The Devils, who added P.K. Subban, Wayne Simmonds and No. 1 overall pick Jack Hughes in the off-season, are winless through six games (0-4-2), but McKenzie noted Tuesday the blame for the slow start lies beyond just Hynes.

"They’ve not been playing well at all," McKenzie said on Insider Trading. "So much so that today there was fake Twitter news that the New Jersey Devils had actually fired head coach John Hynes and his entire staff and it was not true at all. And it’s not something that general manager Ray Shero is considering at this time.

"So, listen, there have been so many problems with the Devils in the early going. Their goaltending hasn’t been very good.  Their D hasn’t been very good. They’ve had injuries up front and, by the way, Nico Hischier is believed to be day-to-day with an injury. So we’ll see how long he’s going to be out, but maybe not that long. At some point maybe Ray Shero is going to have to look to do something to shore up his lineup. But firing the coach, at this moment in time, is not one of those considerations."

Hynes, 44, is in his fifth season behind the bench with the Devils. He has a 141-150-43 record since joining the team, reaching the playoffs once - a first-round exit in 2017-18. Prior to joining the Devils, he spent six seasons as head coach of the AHL's Wilkes-Barre/Scranton Penguins.

The Wild, meanwhile, dropped to 1-5 with their 4-2 loss to the Toronto Maple Leafs Tuesday night. The team is coming off a tumultuous off-season which saw general manager Paul Fenton fired after just one season on the job and replaced by Bill Guerin.

"It’s pretty high with new GM Bill Guerin," LeBrun said of the patience level in Minnesota. "It’s already led to some speculation, obviously, [about] Bruce Boudreau’s future and it makes sense. I mean, he’s a coach that’s been inherited by a new GM. He’s been there awhile. His contract as a coach is done at the end of the year. He has a couple of years tacked onto that as a consultant, but the guy wants to coach. So, all of the elements are there where you understand the speculation.

"But, in speaking with Bill Guerin on Tuesday, he said, 'Listen, I respect Bruce Boudreau. I’m going to be patient here.' When he says patient, he means not just with him but with the entire roster before he starts making big changes. To me, I don’t see anything happening there imminently in terms of the head coach."

Boudreau is in his fourth season as head coach of the Wild, having joined the team after a five-year stint with the Anaheim Ducks. He has a 132-91-28 record with Minnesota and led the team to a postseason berth in each of his first two seasons before missing the playoffs last spring. The 2007-08 Jack Adams Award winner, Boudreau has a 541-283-108 record in 932 games as a head coach with the Washington Capitals, Ducks and Wild.

Along with the Wild, the Dallas Stars are also off to a rough start (1-5-1)  in the Central Division, and also have just one win in seven games this season. According to TSN Hockey Insider Darren Dreger, however, the Stars are looking to a free agent signee to boost their lineup.

"A tough start for the Dallas Stars out of the gate as well. But the Stars organization believes they are a better team than their record clearly indicates," Dreger said. "There’s no sense of panic coming from management or the coaching staff. In fact, they’re hoping that veteran Corey Perry can inject some competitiveness into the lineup. He could play as early as Wednesday. If not, then Friday. He’ll help bring some edge to a team that needs to push harder and they’re hoping he can help a sluggish power play as well."

Stars head coach Jim Montgomery in his second season on the job and led the team to the second round of the playoffs last spring.