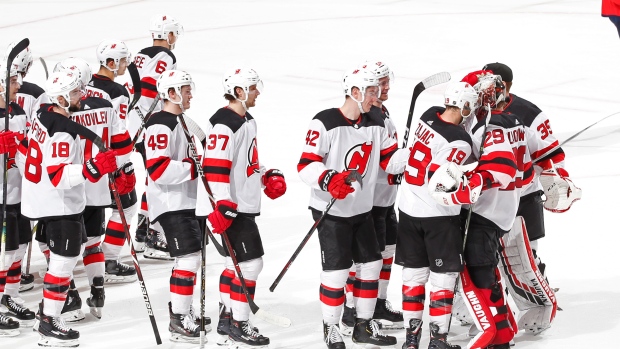 The luck of the draw helped New Jersey take a huge step in that direction Tuesday.

The Devils will pick first at June's NHL draft after the lottery balls fell in their favour — bumping the franchise up to the top spot from No. 3.

Shero wouldn't tip his hand after the order was revealed, but presumptive No. 1 pick Jack Hughes was already on everyone's mind.

"It's just an exciting night."

The New York Rangers will choose second at the draft — the team's first top-2 selection since 1966 when they grabbed future Hall of Fame defenceman Brad Park — after moving up from sixth.

The night's other big winner was the Chicago Blackhawks, who went from No. 12 to No. 3 despite having just a 2.5 per cent chance of securing the top selection.

Speaking with reporters before the lottery order was announced, the five-foot-10, 168-pound Hughes outlined his skill set.

"My biggest things are my inner drive, my competitiveness," he said. "I want to score every shift and make a play happen.

"I like to say I play like Patrick Kane a little bit, but I feel I'm more of a Mat Barzal in how I carve through the neutral zone, lug the puck, and find my teammates."

Tuesday marked the second time in three years the Devils, who had an 11.5 per cent chance of getting the top pick, have won the lottery after moving from fifth to first in 2017 before selection centre Nico Hischier.

New Jersey also has three second-round picks and two thirds at the upcoming draft in Vancouver as the club looks to rebound from a disappointing campaign.

"Getting Nico was a big step," Shero said. "And doing this again, you have to be lucky, you have to have not a great year, obviously.

The night's big losers were the Colorado Avalanche and Los Angeles Kings.

The Avalanche, who open the playoffs Wednesday against the Calgary Flames, had the best odds of landing the first pick at 18.5 per cent after acquiring the selection from the Ottawa Senators in the trade for Matt Duchene in November 2017, but instead fell down to the No. 4 slot.

Ottawa, which finished 31st in the overall standings this season, could have sent the team's first pick at last June's draft to the Avalanche, but kept the selection and took winger Brady Tkachuk at No. 4.

Los Angeles, meanwhile, had the second-best odds of winning the 2019 lottery at 13.5 per cent, but will pick fifth.

The Montreal Canadiens, Vancouver Canucks and Edmonton Oilers were the only Canadian teams involved in the lottery. Edmonton, which came in with the seventh-best odds, will pick eighth, while Vancouver slipped from ninth to 10th. Montreal remained unchanged and will select 15th.

The 15 teams that failed to qualify for the 2019 playoffs — or the franchises that acquired the first-round picks of non-playoff clubs — participated in the lottery.

Asked if he's always wanted to an NHL star, he responded with a smile: "I didn't really dream of being a grinder."

Hughes, who was born in Orlando, Fla., but grew up in Mississauga, Ont., skates with Devils winger Taylor Hall in the summer.

Hall has had some incredible luck with the lottery balls in his career. Of the nine drafts since he entered the league as the No. 1 pick by the Edmonton Oilers in 2010, his team has picked first five times.

"Very excited to welcome our future #1 overall pick to Jersey!" Hall tweeted. "Great start to the summer for the Devils."

Hughes could become the second player to be chosen first overall directly out of the USNDT — and the first to go right to the NHL — after the St. Louis Blues took defenceman Erik Johnson at No. 1 in 2006.

"I'm focused on playing in the NHL next year," said Hughes, who turns 18 on May 14. "I feel like I could do it. With the way the game is now, how it's speed and skill, I feel like my game translates perfectly."

Finish winger Kappo Kakko is ranked as the top European skater and is expected to go No. 2 at the draft. The 18-year-old set a Finnish league record with 22 goals in his rookie season to go along with 16 assists for 38 points in 45 games. He added two goals and three assists in seven games at the world juniors.

Rangers general manager Jeff Gorton — who was on the same flight as Shero into Toronto, one that included a fairly bumpy landing — said moving up to No. 2 will help move his team's rebuild along.

"My phone's in my back pocket buzzing like crazy," he said. "I haven't been able to look at it, but I can only imagine what people are saying."