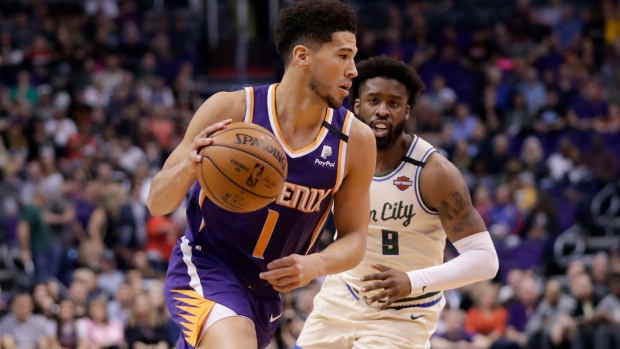 PHOENIX — Devin Booker scored 20 of his 36 points in Phoenix's 47-point first quarter and the Suns beat the NBA-leading Milwaukee Bucks 140-131 on Sunday night,

The Bucks played without MVP Giannis Antetokounmpo because of a minor knee sprain. Injured Friday night in a loss at the Los Angeles Lakers, he'll also sit out Monday night at Denver.

Ricky Rubio had a triple-double for the Suns with 25 points, 13 assists and 13 rebounds, becoming the first Suns player since Steve Nash on March 30, 2005, with at least a dozen points, assists and rebounds.

“It is an honour for me,’’ Rubio said of being in the same statistical realm of Nash, a player he has long admired.

“It is hard to win three quarters and lose a game by nine,’’ Milwaukee coach Mike Budenholzer said. “Still, it was a huge hole. They did a lot of things well.’’

After the Bucks cut their deficit to eight points, Baynes threw down a dunk, banked in a layup and nailed a 3-pointer. Milwaukee rallied to close with within six, 134-128, and the Suns finished it off at the free-throw line.

“I just thought we executed; didn’t panic,’’ Suns coach Monty Williams said. “And that’s what you have to do against a team that maybe is the favourite to win a title.’’

On the heels of Baynes’ unprecedented 9-of-14 3-point night against Portland, the Suns made eight of their first 10 and 9 of 14 overall to take a 19-point lead with their biggest quarter of the season.

“Tough first quarter for us,’’ Budenholzer said. “Phoenix’s aggressiveness on both end of the court put them in a position where they could maintain a lead and take it home. ‘’

“It’s the highest form of respect for me,’’ Booker said of the box-and-one defence the Bucks attempted. He credited his teammates with foiling it, as six Suns players scored in double figures.

A fan swished a half-court shot and won a Kia.

Suns: C Deandre Ayton was sidelined by a left ankle sprain. F Cameron Johnson was not with the team, due to an illness.

Bucks: At Denver on Monday night.

Suns: At Portland on Tuesday night.