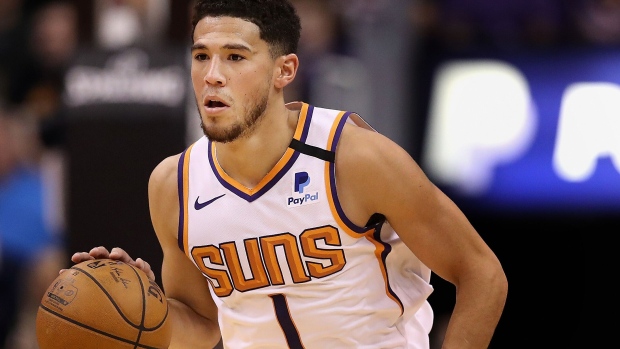 The NBA 2K Players Tournament, which started last Friday with a field of 16 of the NBA’s biggest stars, is now down to just eight competitors as the virtual tournament enters the quarterfinals.

Catch the quarterfinals of the NBA 2K Players Tournament starting at 7 p.m. ET / 4 p.m. PT on TSN4, the TSN App and TSN Direct

Each of the remaining players earned a berth in the quarterfinals after taking out their respective first-round opponents in a 24-minute match of NBA 2K20, the top-selling NBA video game simulation.

Here’s who each of the remaining eight players will face in the quarters, along with how they fared in the first round:

*Note: Ahead of the start of the tournament, the players were seeded based on their player rating in NBA 2K20 and were assigned eight teams that they can choose from. Once a player uses a team, he can no longer select it again for the duration of the tournament.

The second-year point guard, who used the Milwaukee Bucks in the first round, handed the 15th-seeded Harrison Barnes of the Sacramento Kings [Toronto Raptors], the second-most lopsided loss of the tournament — a 101 to 59 beatdown.

Booker, who is one of the NBA’s best scorers, took down 12th-seeded rookie Michael Porter Jr. of the Denver Nuggets [Los Angeles Lakers] 85-75 with the Bucks.

In a matchup of their real-life teams, Harrell, who was seemingly one of the top candidates for Most Improved Player of The Year prior to the NBA suspending its season March 11 due to the COVID-19 outbreak, used his Clippers squad to beat ninth seed, 2020 all-star Domantas Sabonis of the Indiana Pacers, 73-51.

The Clippers guard, who is best-known for being a pesky defender, used the Bucks to blow out third-seeded Hassan Whiteside of the Heat [Lakers] 84-54.

This year’s Slam Dunk Contest champion, Jones Jr. [Bucks], toppled former league MVP and No. 1 overall seed Kevin Durant of the Nets [Clippers], who has sat out all of this season with an Achilles injury, 78-62.