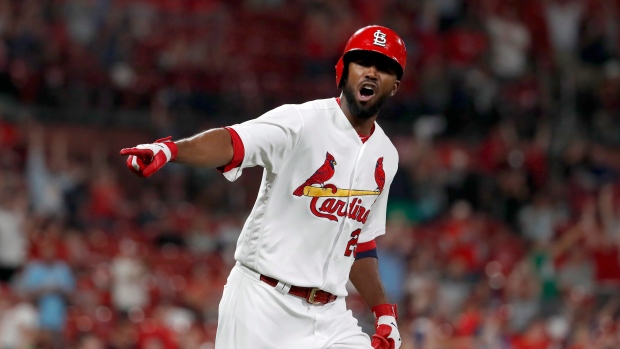 ST. LOUIS — Yadier Molina knew Dexter Fowler would come up big, even before Fowler did.

Marcell Ozuna, Paul DeJong and Fowler each hit two-run homers, and the St. Louis Cardinals came back to beat the Colorado Rockies 6-5 on Thursday night.

Fowler's 15th home run of the season, off of a 97 mph fastball from Yency Almonte (0-1) in the seventh, capped the rally. Molina had his hands in the air as the pitch left Almonte's hand.

"I got a good feeling the way he was the previous at-bat," Molina said. "He was taking good swings, and I knew it for some reason."

Fowler made solid contact his previous two at-bats, sending a pair of drives to the centre field wall that were caught. After the second fly out, Paul Goldschmidt gave some advice to his teammate.

Matt Carpenter set it up by working a walk in an eight-pitch, pinch-hitting appearance to lead off the frame.

"He came off the bench with the right kind of mindset, took a really, really good, tough, quality at-bat, worked a deep count and then made the guy make pitches and worked a walk and brought the go-ahead run to the plate which we were rewarded for," manager Mike Shildt said.

"The situation's there," Fowler said of his recent surge, which has coincided with his being moved to the leadoff spot. "The guys have been getting on base and I've just been in the right situation at the right times."

Dominic Leone (1-0), who was recalled from Triple-A Memphis before the game, got the win. Giovanny Gallegos and Andrew Miller pitched a scoreless eighth and Carlos Martínez picked up his 15th save in 18 opportunities.

It was the third straight start in which Cardinals starter Miles Mikolas gave up five earned runs. The Rockies put runners on the bases in five of his six innings, but St. Louis managed to win for the fourth time in its last five games.

"It was a nice win, a resilient win," Shildt said.

Ozuna's blast into the upper deck in left field in the fourth came after Goldschmidt singled, tying the game 2-2. Ozuna has hit safely in 13 of his last 16 games.

DeJong drilled German Márquez's curve into the left-centre bleachers in the sixth to cut it to 5-4. DeJong's two-run homer extended his RBI streak to four games, one shy of his career high.

"We trust in each other," Molina said. "We know that we can come back in any situation. We've proved that in the past and we proved it tonight."

Márquez allowed four runs in six innings, on six hits, a pair of walks and four strikeouts as the Rockies lost for the third time in their last four tries.

Nolan Arenado's broke a 2-2 tie with a three-run homer in the fifth. Márquez and Charlie Blackmon, who extended his hitting streak to seven games, hit safely ahead of him.

Ryan McMahon singled home a run and Tony Wolters drove in another with a sacrifice fly to give the Rockies a 2-0 lead in the second.

One night after losing 5-3 to the Brewers in a game called after 7 1/2 innings due to rain, the first rain-shortened game in Busch Stadium III history, the Cardinals once again dealt with the elements as the start of the game was delayed 52 minutes by rain.

The Rockies will send RHP Peter Lambert (2-3, 6.55 ERA) to the mound in the second game of the four-game series against the Cardinals and RHP Jack Flaherty (7-6, 3.46 ERA). Lambert will be making his first-ever start against St. Louis. Flaherty has won his last three starts and has only allowed one run in his last 28 innings.