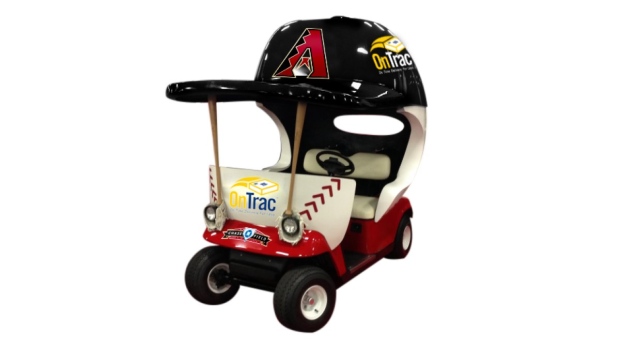 The Arizona Diamondbacks are reintroducing the bullpen car to the MLB.

Diamondbacks president and CEO Derrick Hall told ESPN’s Darren Rovell the team will use golf carts to bring in relief pitchers this season.

It's been 22 years since any MLB team used a bullpen car in their stadium.

"I think it wore out its welcome," Hall said. "There were these new stadiums, and the focus shifted to the guys running through gates and onto the mound. We think the time is right to bring it back."

The Diamondbacks have already sold sponsorship for their two golf carts, which have been shaped to include the team's helmet as a roof, to OnTrac courier service.

This is actually happening.

MLB has put a focus on cutting game times down and Hall argues the return of bullpen cars could help that cause.

"An ancillary benefit might be that it could speed up the game," Hall said. "I expect a lot of teams to follow suit."

Diamondbacks pitching coach Mike Fetters said the team won't force relievers to take the cart to the mound and it will be offered to both teams.

"Whatever makes them comfortable," Fetters told ESPN. "We're not going to force it."