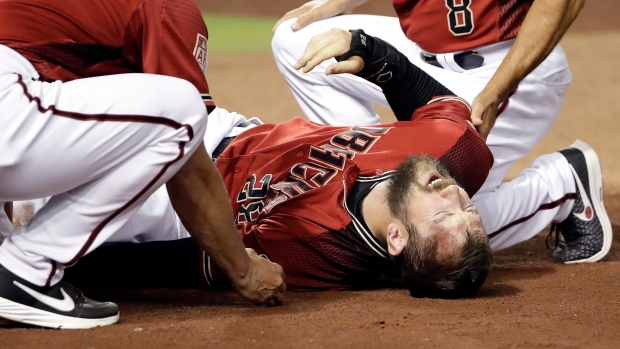 Souza slipped on home plate and his left leg jammed into the ground during an exhibition against the Chicago White Sox. The Diamondbacks said Tuesday he has a torn ACL, a torn lateral collateral ligament, a partial tear of his left posterior cruciate ligament, and a tear of his posterior lateral capsule.

"A really unfortunate situation for us and for him," manager Torey Lovullo said. "We hurt for him right now."

Souza, the expected starter in right field, will have the surgery when the tissue settles down, Lovullo said.

It is the second straight spring in which Souza has been injured. He tore his right pectoral muscle last year and missed about eight weeks of the regular season.

Souza hit .220 with five homers and 29 RBIs in 72 games with the Diamondbacks last season and was being counted on to add offence to a team that lost free agents Paul Goldschmidt and A.J. Pollock to free agency.

Souza hit .239 with 30 homers, 78 RBIs and 16 stolen bases for Tampa Bay in 2017 before being acquired by Arizona in a three-team trade that sent Brandon Drury to the Yankees and four minor leaguers to the Rays.

Free agent acquisition Adam Jones will take over in right field and Ketel Marte will spend most of his time in centre field, Lovullo said, with David Peralta remaining in in left field. Jarrod Dyson is the primary outfield reserve.

"We have some depth," Lovullo said. "Some guys are going to get some opportunities to step in and get a number of at-bats."