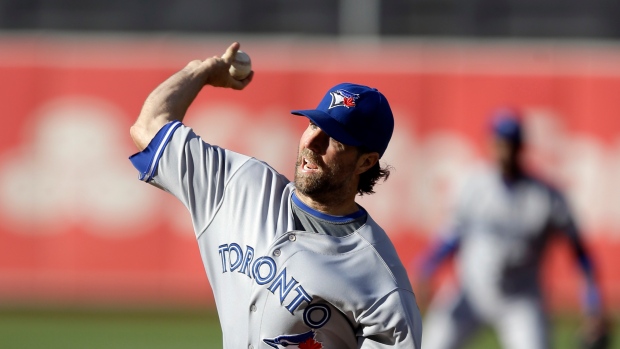 (SportsNetwork.com) - R.A. Dickey will try to get both himself and the Toronto Blue Jays back on track Tuesday night in the middle contest of a three-game set with the streaking Los Angeles Angels of Anaheim.

Dickey has lost four straight starts, falling to 6-8 with a 4.10 earned run average on the season. That includes a 1-6 mark on the road.

The right-handed knuckleballer, though, did put together a solid effort on Thursday in Oakland despite taking a 4-1 loss. He gave up all four runs, but two were unearned and he struck out six in eight innings for a complete-game loss.

It was Dickey's longest outing since he pitched 8 1/3 frames to beat the Athletics on May 24.

The 39-year-old Dickey is 3-3 with a save and a 4.48 ERA lifetime versus the Angels, covering 23 meetings with seven starts.

The Blue Jays have opened up a 10-game road trip with five straight losses and have dropped eight of their last 10 to fall three games back of the Baltimore Orioles for first place in the AL East.

J.A. Happ surrendered five runs on seven hits and three walks over 4 1/3 frames for Toronto, while Juan Francisco smacked a solo homer to pace an offense that lost Edwin Encarnacion to a right quadriceps strain.

Encarnacion had ripped 26 homers with 70 RBI on the year, but is expected to be sidelined up to a month with the injury that also will force the first baseman to miss the upcoming All-Star Game.

With Encarnacion out, Jose Bautista played first base last night versus the Angels, vacating his usual outfield spot that he has been unable to play as of late anyway due to a strained left hamstring. Nolan Reimold, claimed off waivers from Oakland on Sunday, started in right field in his season debut and went 0-for-3.

Reimold was recovering from a serious neck injury.

While Toronto is trying to overcome injuries, the Angels continue to roll at home. They have won 11 in a row as the hosting club, their longest winning streak at home since a club-record 12-game run from July 4-Aug. 4, 1967.

Los Angeles didn't allow the loss of Weaver to slow it down, with Matt Shoemaker coming in and getting the win after giving up two runs over 3 2/3 innings.

"I felt something on a comeback by (Toronto's Adam) Lind. When I went into the dugout it started to tighten up," Weaver said. "We did some treatment on it and it definitely feels better right now. I think I should be ready for my next start."

The Angels, who have won five straight and seven of their last eight overall, will try to match their longest home winning streak tonight behind Tyler Skaggs as the young lefty makes his second start since coming off the disabled list.

Skaggs hadn't started since June 5 due to a right hamstring injury before facing the Chicago White Sox on Wednesday. He did not get a decision, allowing two runs on five hits and a walk over 7 2/3 frames. Skaggs struck out six while depositing 70 of his 87 pitches for strikes.

Still winless since May 20, the 22-year-old Skaggs is 4-4 with a 4.16 ERA on the year and faced Toronto for the first time in his career back on May 10. He picked up a win on that day, yielding two earned runs over eight innings of work.

The Angels won three of four when these teams met up at Rogers Centre from May 9-12 and have claimed a victory in 11 of the previous 13 encounters overall.