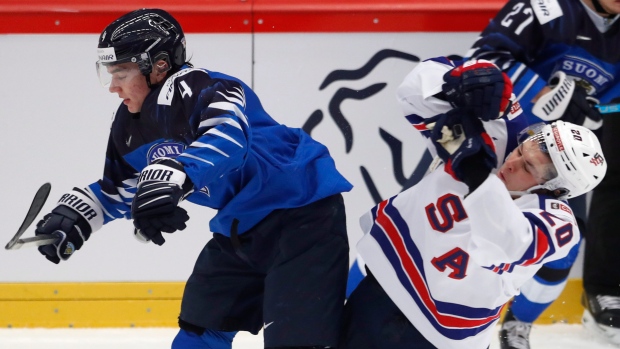 TSN reporter Mark Masters checks in daily with news and notes on Team Canada, which held a media availability at its hotel on Friday ahead of Saturday’s semifinal against Finland.

Team USA seemed stunned. After scoring 17 goals in four preliminary round games, the Americans were shut out 1-0 by Finland in the quarter-finals.

"It's tough to take in right now," said American sniper Cole Caufield moments after the buzzer sounded. "I didn't think we gave it our best game. I don't think we brought our 'A' game. We didn’t create enough the whole game."

Finland could sense the American annoyance building as the minutes drained from Thursday’s elimination encounter.

"After the second period it was easy to see they were frustrated," said Finnish defenceman Toni Utunen, "and they started to play a little by themselves so it was good for us."

"They played to their identity," the Minnesota-Duluth bench boss said, "which we knew would be a hard game. We didn't do enough offensively, we didn't create a lot of time there, a lot of one and dones and not a lot of second chances and, obviously, they got the big power-play goal."​

"It was a tight game," said Finnish coach Raimo Helminen, "but the game was in our hands almost the whole game. That's what I felt on the bench. We worked hard, big time. They couldn't get into the middle. They didn't get too many chances. Our players were so together. They gave out almost nothing."

"We played so well together and as a group," said Winnipeg Jets prospect Ville Heinola. "That was our strength."

This is what Team Canada is up against on Saturday in the semifinals. The Finns are deep, disciplined, patient and talented.

"A very good team," observed Canada assistant coach Mitch Love. "A team that had an excellent hockey game yesterday. A team that doesn't give you a lot so we got our work cut out for us. We expect their best and we have to be at our best."

Canada's scorching power play, leading the tournament with a 44 per cent success rate, will face a formidable roadblock in Finland's second ranked penalty kill (86 per cent).

"They're on top of you," said Love, "just like their five-on-five game, so we're going to have to be ready to make plays quickly."

Finland is a team with a capital T and very comfortable against a North American opponent.

"Canada plays pretty similar to USA," noted Heinola, "so we don't have to change anything, we can play just like that game."

Finland also appears to be getting stronger. Just like last year, they finished third in the group stage, but panic never set in. It's all about peaking at the right time.

"Our first couple games, not our best," said defenceman Lassi Thomson, an Ottawa Senators prospect who serves as captain, "but now we had a good game against USA so we're going to play good next game and win a couple more."

With a tight, structured affair expected, Canada will rely even more on the game-breaking ability of Alexis Lafreniere, who didn't seem to miss a beat in his return from injury on Thursday. He scored a goal on the power play and also picked up an assist on the opening goal.

But there is actually one tweak the coaching staff wants to see in the Rimouski left winger's game.

"He's probably more of a pass-first guy," said Love. "He had a few looks, especially on the power play where he released the puck coming down that flank, and he scored on one of them and hopefully that brings some more confidence into his game."

Even Barrett Hayton, who has seen Lafreniere assist on three of his five goals here, wouldn't mind if his linemate kept the rock every now and then.

"You see his playmaking skills, but you saw last game he has a pretty elite release," Canada's captain said, "so definitely shooting the puck little bit more wouldn't hurt."

What's crazy is how quickly Lafreniere, who has 23 goals in 32 QMJHL games this season, silenced any concern about his left-knee injury (bone bruise and muscle strain). Is he really 100 per cent?

"I believe so," said Love. "He looked it. His first shift he had a pretty nice hit so it looks like his body's physically there."

"It felt really good," Lafreniere said nonchalantly after the game. "It's fun to be back and be with the boys."

"He's a star," said Lethbridge forward Dylan Cozens. "He's unbelievable. Every time he has the puck, he's got his head up and he’s looking to make a play. He's a threat."

"I was scared a little bit, but it was good recovery with the docs," he said. "My knee twisted a little bit and I went down. It was scary a bit at the start, but after I felt good."

A reliable defensive stalwart for Team Canada, Jacob Bernard-Docker has worked hard to improve his shot over the last year.

"Just shooting a lot in the cage and working on forearm strength," the University of North Dakota defenceman explained. "It's always something I'm trying to get better at."

Bernard-Docker is also spending time watching video of elite shooters he admires regardless of position.

"I know he's a forward, but Auston Matthews is the one guy who comes to mind," he said. "You look at him and he just pulls the puck like no one else in the league, it’s pretty fun to watch."

Bernard-Docker, who has three goals in 17 NCAA games this season, showed off a slick move in the quarter-finals against Slovakia firing home his first World Juniors goal.

"I saw the winger sliding out a bit so just tried to change the angle a bit and had a screen in front," he recalled.

Jacob Bernard-Docker's first of the tournament makes it 3-0 for 🇨🇦 pic.twitter.com/ifwhKzI6hC

Hunter liked what he saw from the Senators prospect and the rest of his blueliners, who combined for five points against the Slovaks.

"Our D were getting pucks through and that's a key," Hunter said. "Every team blocks so many shots and we did a good job of moving along the line and getting shots through."

Rasmus Sandin left Sweden's final preliminary-round game after getting slashed on the left wrist. Again, in the quarter-finals, the defenceman took a hack to the same sore spot and was sent to the room prematurely.

Is he playing through pain right now?

"Yeah, a little, maybe, but it’s not too bad, it’s getting better," the Toronto Maple Leafs prospect said.

Does Sandin feel like the Czechs were targeting him?

"I'm not trying to think about it too much," he said. "I don't know if they're trying to hit my wrist or not. I'm trying to focus on my stuff."

"It says what kind of character he has," said coach Tomas Monten. "He wants to play."

Sandin plays a top-pair role for the Swedes with teammate David Gustafsson, a Jets prospect, calling him the best defenceman in the tournament.

They will lean on Sandin heavily in the semifinals against Russia.

What message did the Leafs give Sandin when they loaned him from the AHL to Team Sweden?

"They pretty much said, 'Good luck. Go win silver,'" Sandin said with a chuckle. "That was pretty much it. But, I don't want to listen to that too much."

It was Marlies GM Laurence Gilman​ and the Marlies coaching staff, who offered the tongue-in-cheek parting shot.

"This is one of the times I’m going to try to not listen to my coaches," said Sandin with a laugh.

Sandin said he hasn't had much contact with folks back home since arriving at the World Juniors although he is still exchanging messages with William Nylander.

Nils Höglander​ is putting on a show at the World Juniors. The Vancouver Canucks prospect leads the tournament in scoring with 10 points and he pulled off the lacrosse move in the opening game, one of his five goals.

"His creativity in the offensive zone," said Gustafsson. "I mean, sometimes I just give him the puck and just watch, just stand by and watch him doing what he does best."

"He's so fun to watch," marvelled Sandin. "To see his goals, his moves in small areas out on the ice is surreal to see."

Nils Hoglander is changing the game from behind the net, but this time he can't put it home. 😅 pic.twitter.com/668mw6OKx6

In the quarter-finals, Höglander​ scored the opening goal against the host Czechs and then put his finger to his lips.

"He's got kind of his own swagger," said Sandin. "He's a little bit different. He might not be a typical Swede, but he's a guy you like to have on your team. He can do it all. He can do a lacrosse goal as everyone saw this tournament. He can dangle, he can hit, he can skate. He's a huge addition for our team."

"He can do whatever he wants to," said Gustafsson with a smile. "He has confidence in it and he's a skilled player."

"It was a huge goal and I hope to see something similar tomorrow," he said with a smile.

Utunen still has the puck he used to score that goal. He keeps it in a safe spot in his dad's house. And sometimes he'll watch the video of that magical moment. What goes through his mind?

"I don't know," he said. "It's hard to explain that feeling, what happens after the goal."

It was a special moment for Utunen and not just because the magnitude of the game. The fact is Utunen simply doesn't score much. He has just one goal in 71 career games with Tappara Tampere in the SM-liiga.

Utunen, however, did score two goals against Canada back on July 31 in the World Junior Showcase in Plymouth.

What's the deal? Does he only score against Canada?

"Yeah, I guess so," he said with a laugh. "Last four goals, three of them were against Canada."

So, he's feeling good going into this one?

Team Canada did not hold a practice on Friday, with only backup Nico Daws and Dawson Mercer skating. It was the first time the team stayed off the ice since Christmas Eve.