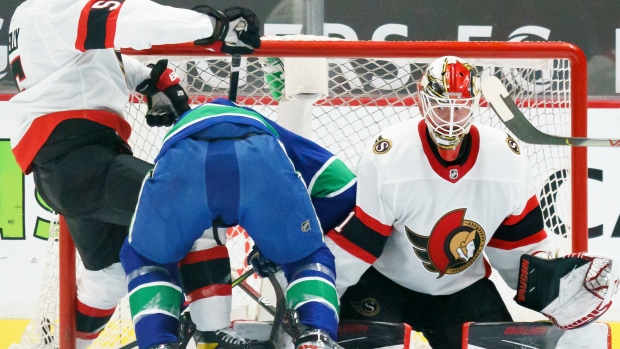 Ottawa Senators head coach D.J. Smith made it clear Wednesday he didn't feel the team's 5-1 loss to the Vancouver Canucks was on the shoulders of goaltender Marcus Hogberg.

Hogberg allowed all five goals on 35 shots as the Senators extended their winless run to six games.

"The goals he gave up were blatant mistakes by us," Smith said.

The Senators, who have not won since defeating the Toronto Maple Leafs in their opening game on Jan. 15, will face the Canucks for a third straight time on Thursday, having been outscored 12-2 in the series so far.

“We’ve let up 10-plus goals in two games. You’re not going to win games like that," Smith said. "We’ve scored two goals in the last three games, too, so both those areas, obviously, are not good enough. And it has to improve.”

After allowing the opening goal just over two minutes in, the Senators went into the first intermission tied 1-1, but a three-goal second period from the Canucks put the game away.

“We’ve put together a period at a time, two periods at a time, but it seems like, for some reason, we just find one period to fall apart and mess everything up," forward Josh Norris said. "We’re young, but that’s not an excuse. Just a lot of mistakes that are very preventable, I think.”

The Senators sit last in the North Division with a 1-5-1 record and have now been outscored 22-6 over their previous four games.

“Losing sucks. I hate losing, everyone in the room hates losing," winger Brady Tkachuk said. "So, we’ve just got to bear down a little bit extra. We’re going to get out of this eventually. We’ve just got to stick together, which we have been, and stay positive. But the focus is on a win tomorrow.”

It's unclear who will start in net for the Senators in Thursday's game. Smith admitted Monday that he considered pulling Matt Murray after the second period for a second straight start but elected to keep the off-season addition in net for the entirety of their 7-1 loss.

"Certainly, he didn't have a very good game, but he's got to work through it and find a way to battle for us there," Smith said of Murray on Monday. "He's no different than any other player and he's got to find his groove here."