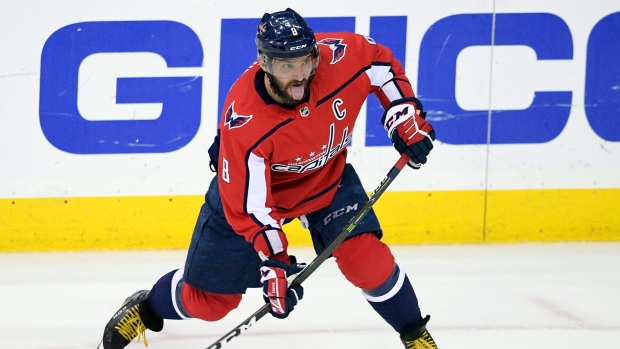 Is counterattacking a more successful strategy on home ice? It’s a theory I’m starting to kick around – a theory prime for investigation during the dog days of summer.

Before getting to the theory, there’s some necessary housekeeping to do on score effects. It’s impossible to ignore how omnipresent score effects are in today’s game. Teams with leads tend to nurse them to the finish line – you tend to see more attention to defensive structure and fewer risks taken to create offence. Teams will pick and choose their spots to create on attacking sequences, but very frequently err on the side of caution.

What does this mean? Statistically speaking, we see teams with leads tend to yield a higher rate of shots against, though many of those shots tend to get pushed to the perimeter. We also see teams with leads experience spikes in shooting percentages on the offensive end. It seems counter-intuitive, but teams with leads – offensively speaking, anyway – frequently trade shot quantity in for shot quality. Teams will pick spots in attacking sequences where they are far more likely to create goal-scoring opportunities. If the opportunity isn’t readily there, they’re much more inclined to dump the puck in and take a line change. Time is always on the side of the team with the lead, so strategy often dictates the run of play.

The graph below shows this relationship – an inverse one between shot share and shooting percentage of a team depending on the game state. 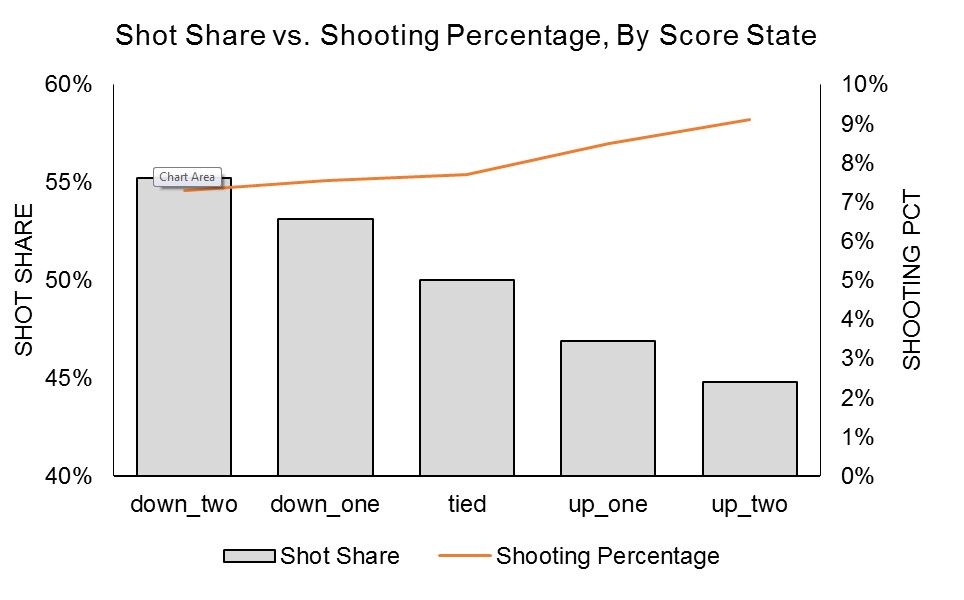 Now on to the theory.

A successful counterattacking team needs to do many things well. One of the more obvious things is the ability to generate shots from in close. If you’re turning rush opportunities into soft wrist shots from the blueline, you probably haven’t created much value for your team.

One thing we know is that shot distances for home and road teams are pretty similar. If you look at score tied game states, the distribution of shots by distance for either side is very similar, with a marginal edge (i.e. closer distance) to the home side: 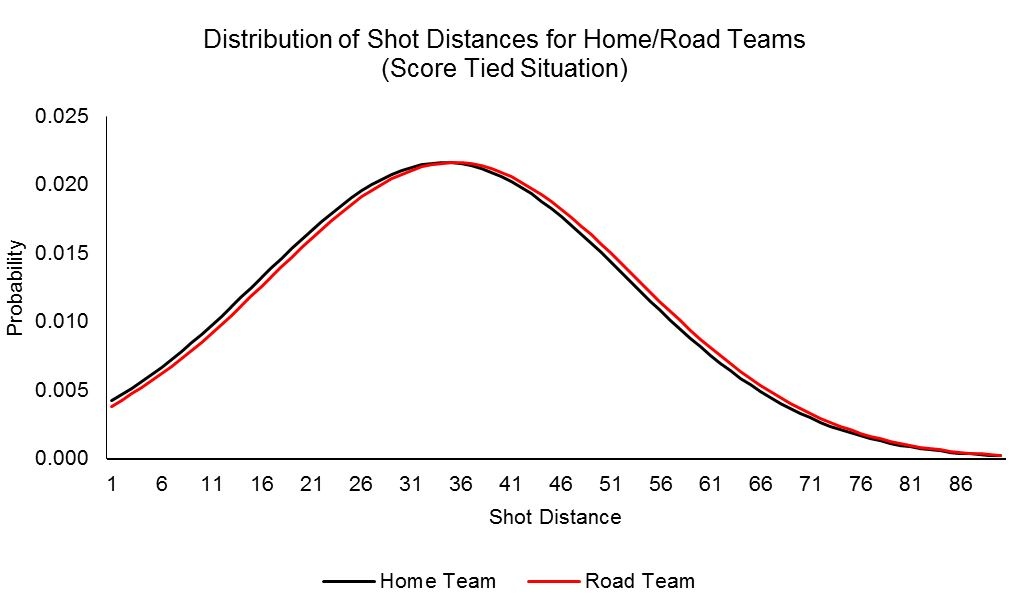 Home teams will shoot from marginally closer distances and will generally outshoot their opponents (in terms of volume). If two average opponents played one another, you would expect the home team to be shooting from more than a foot closer than their road foe. And, you could expect them to get about 52 of every 100 shots. It seems like small change, but hey, everything counts.

But let’s change the game state. Let’s randomly select 25,000 shots in the modern era where teams were playing with the lead. When playing with the lead, we know score effects – to some degree, anyway – have kicked in. That means a more conservative approach in the offensive zone and a more shell-like structure in the defensive zone. Do shot distances change here? 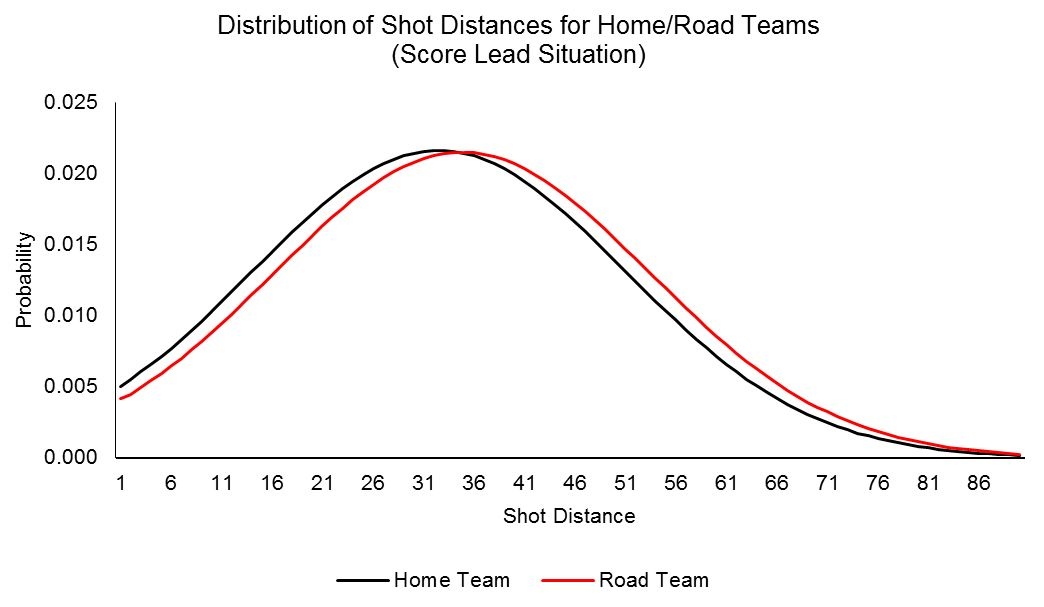 This is where things get fascinating. Teams on the road and playing with a lead saw their shot distances come down favourably, but only to a small degree. Teams at home, however, saw a pretty sizable move to the left. The average shot distance comes down by more than a foot, and the distribution of the curve shifts left, unlike their road counterparts.

Now, not every single shot taken with the lead comes off the rush. Teams with leads frequently cycle the puck in the offensive zone. But we now know that shot distances come down when teams are playing with the leads. We also know that shooting percentages improve when playing with the lead. And we know through the shot shares that teams are more selective in the shots that they take. So, it would certainly seem possible that an increase of rush opportunities or rebound opportunities created off the rush are driving shot distances down when teams are in the lead.

The question that I can’t yet answer with confidence is why it’s materially different for home teams than road teams. There are an awful lot of factors at play here – home teams generally have a better chance of winning the game to begin with, as do teams playing with the lead. It seems possible that home teams playing with a lead see those probabilities compound.

There may also be qualitative explanations around this. Perhaps players are simply more comfortable doing everything on home ice, and that manifests itself in their ability to counterattack/generate rushes more successfully. After all, we already know home teams are better at controlling possession. The average team on home ice last year, when adjusting for score effects, controlled 52 per cent of play. That’s a sizable difference.

And, of course, there may be some scorer bias taking effect here, though I’d ask why that bias doesn’t manifest itself when the scores of games are tied.

Anyways, it’s an interesting thought exercise on one of the sports calendar’s deadest days. Perhaps you have a better answer or conclusion than I do!