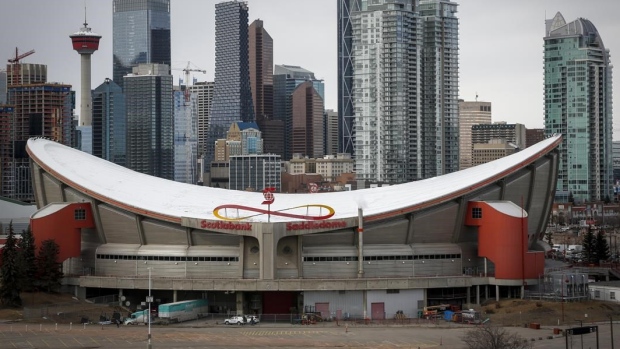 More than a dozen infectious disease and critical care doctors are calling on the Calgary Flames and Edmonton Oilers to drop plans to play games in full-capacity arenas this season as the province of Alberta lurches into an unprecedented medical crisis amid the fourth wave of COVID-19.

The Flames are scheduled to host the Oilers on Sunday in the teams’ first National Hockey League pre-season game of the 2021-22 season. Both Alberta-based teams say they have safety protocols in place and plan to play to 100 per cent capacity.

Those decisions to play in front of packed arenas come as the Alberta government is asking the federal government for assistance airlifting its sickest patients to hospitals in other provinces.

Alberta Health Services, the provincial body that oversees healthcare in Alberta, has said it is staring down the worst health-care crisis in its history

“Things are so desperate,” Dr. Ilan Schwartz, an infectious disease doctor in Edmonton, said in an interview with TSN. “In all of Alberta we have 340 ICU beds. We are literally 10 patients away from having to start choosing who gets treatment and who does not.”

Alberta hospitals have cancelled thousands of surgeries to deal with the flood of COVID-19 patients, most of whom were unvaccinated.

Doctors say they have started planning for the possibility of having to decide which adults and children will be eligible for critical care beds as hospitals fill with patients.

It's a remarkable plunge into crisis in a province where Premier Jason Kenney on June 18 dropped mask mandates and social distancing rules, promising the “best summer ever.” While Kenney told reporters on Sept. 16 that he was sorry for suggesting during the summer that the pandemic was over, he refused to apologize for relaxing public health restrictions.

Alberta on Tuesday reported it has 20,917 active COVID-19 cases, more than twice as many as any other province or territory. Alberta’s health ministry is now asking other provinces to help take its sickest patients.

B.C. and Quebec have informed Alberta they cannot accept ICU patients from the province while Ontario and Manitoba have asked hospitals in those provinces how many Alberta patients they can accommodate, doctors say.

“This is about to be a nightmare like we’ve never seen before,” said Dr. Noel Gibney, an Edmonton critical-care doctor with four decades of experience working in ICUs. “We are now begging other provinces to start taking our ICU patients and we are days away from having to decide which patients will be taken off ventilators and given palliative care, basically oxygen and morphine, to make way for patients that have a better chance to live. It’s jarring that we are asking other provinces to take our patients and at the same time having full hockey arenas that will lead to further spread of COVID-19.”

Dr. Gibney, who is a professor emeritus in the department of critical care medicine at the University of Alberta, said he was contacted Wednesday about resuming his practice because of the provincial crisis.

TSN interviewed 14 infectious disease and critical care doctors about the Oilers and Flames’ safety protocols for the upcoming season. Each of those doctors said the NHL teams should cut back the number of spectators allowed to attend games.

Alberta doctors paint a grim picture of the future.

"We are so close to having to ship people thousands of kilometres away from their loved ones, when they are so sick, and possibly dying," said Dr. Shazma Mithani, an emergency room doctor at the Royal Alexandra Hospital in Edmonton.

Dr. Mithani said the province should be adopting a lock down to try to stop the spread of COVID-19.

"It's reckless, and irresponsible for our province, as well as the Oilers and Flames, to be acting like nothing is going on, like our health-care system is normal," she said. "It’s ridiculous you can go to an Oilers game and drink a beer shoulder-to-shoulder with someone else and yell when McDavid scores a goal, sending droplets everywhere, while our hospitals are bursting at the seams."

The Oilers wrote in a statement to TSN that the team plans to insist spectators provide proof-of-vaccination documents or a negative COVID-19 test to gain entry to Rogers Place, which has a capacity to hold 18,500 spectators. The team said it will insist fans wear masks when they are not eating or drinking.

“We also continue to monitor and evaluate our venue plans and the COVID situation in Alberta and will adjust as needed,” Oilers executive vice president Tim Shipton wrote, adding that all staff and contractors must be fully vaccinated in order to work in the building.

Flames general manager Brad Treliving said Wednesday that all fans must be fully vaccinated to gain entry to the 19,289-seat Scotiabank Saddledome.

“We complied as we always have with all provincial mandates, whether that be in terms of being fully vaccinated, masking, anything that’s required provincially, we’re in compliance with,” Treliving said. “Like everything in this pandemic, you watch, and you read and react as need be. We’ve tried to be leaders in the community in terms of supporting anything health initiative wise and to make we sure we keep everyone, not only our fans, but people in the province, as healthy as we possibly can.”

Tom McMillan, a spokesman for Alberta Health, said the NHL teams and other event organizers can implement more restrictive protocols than mandated by the province, but not less.

"Under the Restrictions Exemption Program, NHL games can occur at full occupancy provided that the teams, at a minimum, require all fans to be vaccinated or have a privately purchased negative rapid test result within the last 72 hours," McMillan wrote in an email to TSN's Ryan Rishaug. "Masking is still required for all fans indoors and other public health measures are encouraged... We are balancing the need to reduce the spread of COVID-19 with the evidence regarding the effectiveness of vaccines. We will continue to monitor the situation closely and recommend any change in our approach if and as needed."

Some doctors outside Alberta are also critical of the Alberta NHL teams' plans for full arenas.

Dr. Anand Kumar, an infectious disease and critical care specialist in Winnipeg, said that modelling from mid-August showed Alberta was at risk for almost 1,000 ICU patients this fall if restrictions lifted earlier were not reintroduced. The province’s normal ICU capacity is just over 200, he said.

Dr. Kumar was among several specialists who raised other concerns, saying that while vaccines remain effective against preventing deaths and hospitalization, the protection they provide against infection has fallen, a development attributed to the more infectious Delta variant and waning vaccine immunity.

Dr. Kumar, an intensivist at Health Sciences Centre and professor of medical microbiology at the University of Manitoba, also said he was worried that hospitals have less capacity than they did a year ago to care for patients with COVID-19. In the span of one week, seven acute care COVID-19 ward nurses recently quit at a Winnipeg hospital, citing mental fatigue and stress, he said.

"This has the potential in [Alberta and Saskatchewan] to get dramatically worse," Dr. Kumar said. "This could easily get to the levels we saw in Italy and New York last year."

Dr. Mike Silverman, an infectious disease specialist at Western University in London, Ont., said his hospital has been asked by Ontario's government if it can accept ICU patients from Alberta. That leaves Dr. Silverman questioning whether any fans should even be allowed to pack NHL arenas in Alberta.

"They did it with no fans for a while and they can go back to it without too much trouble," Dr. Silverman said. "These are extreme times. In Alberta, they're now talking about bringing in emergency protocols for resuscitation, meaning that if someone's heart stops, a doctor may not resuscitate them because if they resuscitate them, they don't have an ICU bed to put them in.

"[The Oilers and Flames] have to be good citizens. They're supposed to be playing for the pride of the city, not helping the city go down the drain... The message the NHL is sending is, 'It's okay that you can't get your cancer surgery, but it's not okay if fans miss a game that they can watch at home on TV. That's just too much to ask.'"